In Timbuktu, muslim shrines destroyed by islamist barbarians have been restored 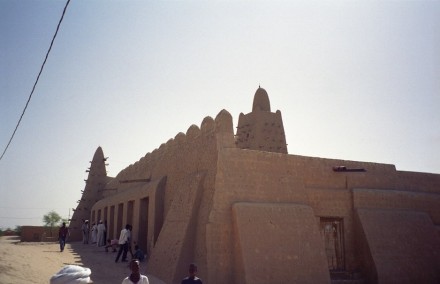 Cultural treasures date back to the 15th and 16th century when the sub-Saharian city had been an economic, intellectual and spiritual center

„These mausoleums are now once again standing. This is irrefutable proof that unity is possible and peace is even stronger than before. We did it and we can do it again,” Director-General of Unesco, Irina Bokova, said on February 04, 2016 at the rebirth ceremony of the Timbuktu mausoleums which had been destroyed by Al-Qaeda linked barbarians in 2012.

The mausoleums dated from the 15th and 16th century when Timbuktu had been an economic, intellectual and spiritual center in the sub-Saharian region. They were located at the trans-desert trading routes towards the North.

In April 2012, after seizing Northern Mali, islamist terrorists had wrecked 14 of the city’s iconic earthen shrines considering them as idolatrous as they referred to Muslim saints.

The recent ceremony, held at the Mosque of Djingareyber, was realized in a traditional way of Muslim religion. In the early morning hours, it began with a ritual sacrifice of five cattle heads and the reading of Koran verses. Later, the keys to the shrines were handed to the families in charge of the care.

The ceremony was intended „to invoke the divine mercy to provide the basis for peace, cohesion and tranquility,“ is said on a Unesco webpage. „These religious rites also represent the rejection of intolerance, violent extremism and religious fundamentalism.“

The reconstruction of the shrines had begun in 2014. It was done according to traditional methods, and by consulting old photos and memories of elders. The works were mainly been realized by local people thus creating work in the region some 1000 km Northeast of the capital Bamako.

This reconstruction procedure referred to the local tradition where culture and knowledge had always been passed by word of mouth.

Funding for the project had come from the World Bank, the European Union, Switzerland, and the US Agency for International Development. The project’s cost US-$ 11 Million (10 Million Euros) included the restoration of thousands of manuscripts.

By the way: Already on January 27, 2016 the Bamako Acoustic Festival had seen a rebirth after silence since 2012. The event aims to bring together African and International artists.