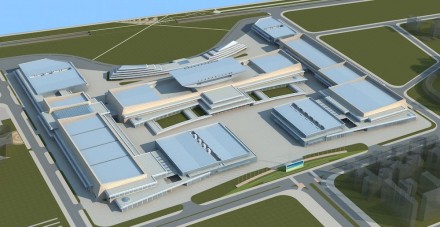 Visitors of this year’s Xiamen Stone Fair (March 06-09, 2016) will find the ring completed: construction works which had started already during last year’s fair and had occupied the large square in front of the main hall with its shape of an oversized bowl have now been finished. Four new halls will give the fair a total of 180,000 m² which is 14,000 more then in 2014.

The graphic shows how these new spaces will be used. One of the new halls will entirely used by Turkish exhibitors. 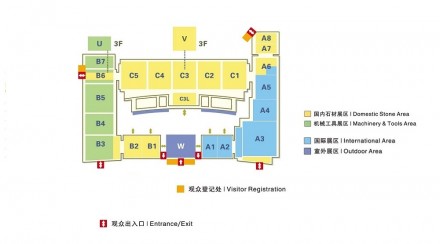 This year on March 07, around 12 o’clock, the new inner court will be the venue of the Lundhs Cup, a soccer tournament between teams of national exhibitors. Originally a private initiative of the Norwegian stone producer and trader Lundhs, it will now be supported by the fair. Last year’s results saw the Chinese team called „Dragons“ as winners. Brazilians had sent a group „Samba“, Norwegians named their players „Vikings“, and also a multi-national „Feniz“ team took part in the competition. Organizers hope that the new venue will bring more fans to cheer their teams.

Although the Chinese economy has significantly cooled down, Xiamen Jinhongxin Exhibition Co. Ltd expects „more than 2000 exhibitors, among them 73% from China and 27% from abroad. Stone producers or traders will account for 77.5% of the total, machinery and tools are expected to be 22.5%“.

An interesting detail: „30% of the exhibitors are companies who don’t exhibit before. New companies will bring you new business opportunities that you can explore,“ as said in the press release.

After a decade and a half of rapid growth, this 16th Xiamen Stone Fair is struggling for more service for its guests.

So the World Stone Congress (WSC) held as usual parallel to the fair has a clearer profile than before in order to give visitors as well as exhibitors a value added: An education day (March 07) is organized in cooperation with the Marble Institute of America (MIA), for the Design Day (also March 07, with morning lectures about architecture and afternoon sessions about product design) international online-magazine Stone-Ideas.com was the co-organizer. For the first day with its Global Master Architects Forum Sou Fujimoto was invited.

Please find the complete program of the Congress in English and Chinese for download below.

Different from information in some official mailings, the fair continues to be open for private visitors. 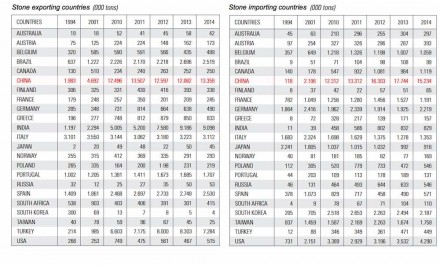 To come to an end: Our table shows the Chinese stone exportation (left) and importation (right) over the last years (courtesy of „XXVI Report Marble and Stones in the World“, Dr. Carlo Montani, 2015).