Turkey: falling back to the 2-billion-US-$-mark after the second weak export year in a row 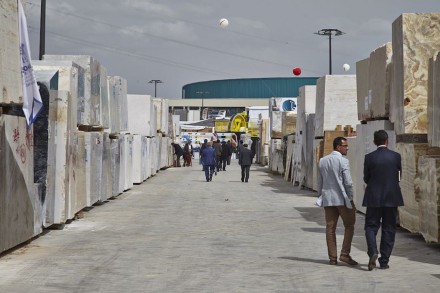 The development stands in sharp contrasts to the forecast. Was it not just 2013 when the magical 2 billion barrier was broken and natural stone valued at 2.225 billion US-$ (8.441 billion t) changed hands for export abroad?

The reasons are obvious: stagnation of the Chinese economy, crisis in Russia, the weak European countries and the war in Syria together with the general instability in Northern Africa.

Also interesting: a glance at Central and South America. Whereas exports as a whole were down particularly because of the weak Brazilian economy -27.59 % some countries experienced considerable growth: Argentina +38.105, Guatemala +51,09% or Uruguay +82,34%. Smaller countries such as Belize or Surinam even reached growth rates of +100% and +300% respectively as did Nicaragua. But the base figures in these countries were very low.

Countries in the Southern African continent were responsible for a healthy over-all growth rate of +24%.

Note that the Turkish stone branch with the aid of government has been undertaking a number of measures to strengthen the market.

Endeavors included the Singapore Stone Show and the Morocco Maroc Stone. The Turkish city of Bursa welcomed guests at its indoor Trade Fair for raw blocks for the first time.

Turkey’s Ministry of Economic Development in Ankara set up the UR-GE-Program some time ago. Its aim is to further international competitiveness in small and medium-sized companies. The companies are encouraged to increase exports.

The branch also pursues the goal of increasing value-added turnover, i.e. to implement design and form and bring stone to the market as a finished product.