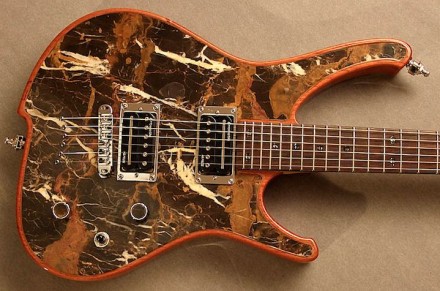 It is Frank Scheucher’s dream that someday someone from the audience will whisper: „That could be a Zerberus.“ That’s the name Scheucher gave his electric guitar label in Germany which presented the „Gorgonized“ collection at the NAMM Trade Fair in Anaheim California.

The name is a portmanteau from Greek mythology in which anyone who looked at the fabulous being instantly petrified. 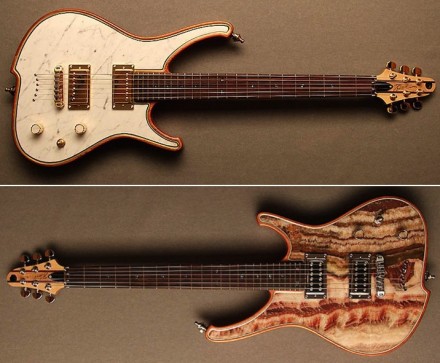 Scheucher’s new electric guitars implement exclusive stone types or semiprecious stone for the guitar’s body. Some seven years were invested in experimentation with optimal weight. By now Gorgonized guitars weigh from 2.8 to 3.5 kg, as much or as little as conventional electric guitars.

Of course the main component of the instruments is noble wood upon which Scheucher applied a 5 mm layer of ultra-thin stone reinforced by a fiberglass mesh. The stone in conjunction with the wood chambers produce „a unique sound and volume“, he says.

In his own words:
* „Whereas the sound waves run along the length of the wood grain, sound waves spread in all directions on stone surfaces. On the stone surface, sound therefore is carried much more regularly and for a longer time after the sting has been strummed, or as the experts would say, produces a nicer Sustain‘.

* In constructing the instrument, I took care to ensure that the bridge and strings are mounted directly on the stone surface. This ensures a quick and strong resonance of the body after strumming, or in technical terms a ‘quick attack’.“

Another particularity is the guitars general resistance to feedback, stone’s resistance to scratches and its availability in a wide variety of colors and structures. „This makes each guitar unique and the best part: no varnish or color stain is needed.“ 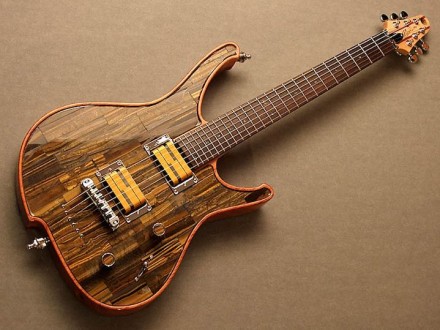 Even if natural stone is an unusual material for building electric guitars, the designer of Gorgonized instruments moves in well-known circles. The models are reminiscent of Fender’s Stratocaster leaning toward Rickenbacker.

But in his company dubbed hellhound Scheucher has also created most extravagant shapes. Nowadays he argues: „New material and extreme shapes? My guitarists should have pulled out.“ 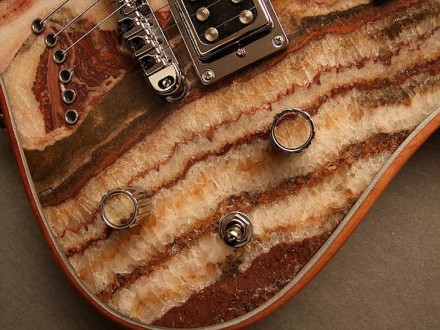 To make guitarists fall in love with their instruments, Scheucher places great emphasis on detail: controls bear the same stone inlay as the guitar body. 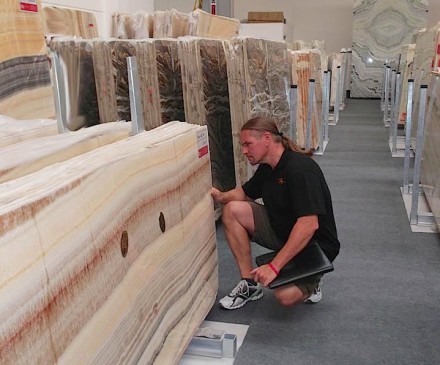