Plate tectonics: parts of an island volcano, complete 70 Million years ago, are now lying 3,500 km apart in the South Atlantic 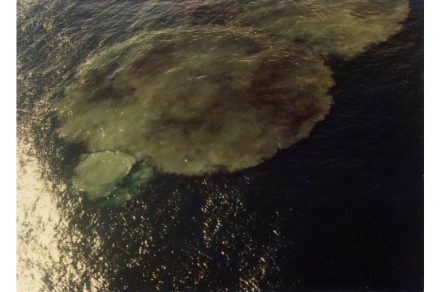 Research by marine scientists from Kiel and Bremerhaven, Germany

Extinct volcanic islands erode to sea level and then disappear below the surface of the ocean. In the course of millions of years, movements of tectonic plates and geological faults can transport these seamounts far from where they originally formed. Research by volcanologists at the Geomar Helmholtz Centre for Ocean Research Kiel together with colleagues from the University of Kiel and the Alfred Wegener Institute Bremerhaven has shown that three seamounts in the South Atlantic Ocean located more than 3,500 kilometers apart once formed a single ocean island volcano.

Two of the volcano-puzzle pieces lie in the southeast Atlantic, 800 (Richardson Seamount) and 1,800 (Meteor seamount) kilometers off the coast of South Africa directly along an east-west running fossil geological fault. It extends from Cape Agulhas in the east to the Falkland Islands to the west and therefore is named Agulhas Falkland Fracture Zone (AFFZ). 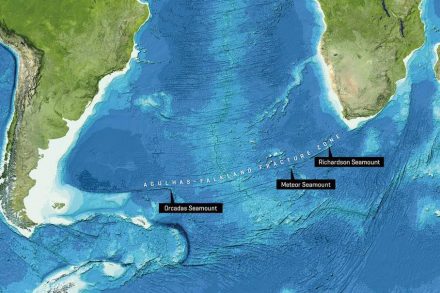 Richardson Seamount lies north of the AFFZ and the Meteor Seamount south of the AFFZ but 1000 kilometers further to the west. „Both have a similar shape and height, the same geochemistry and both are 70 to 80 million years old. It’s obvious that they originally formed two parts of a larger volcano,“ explains Antje Schwindrofska, co-author of the study.

When the Richardson and Meteor seamounts are virtually placed together, it is evident that there is still a missing piece of the original volcano. The scientists found the missing puzzle piece another 2,500 kilometers away to the west halfway to the South American continent. There just south of the AFFZ, lies the Orcadas Seamount. Prof. Dr. Kaj Hoernle, lead author of the study, explains: „It fits into the gap that remains after the other two seamounts have been fitted together. Plate tectonic reconstructions show that Orcadas Seamount was attached to the Meteor Seamount about 60 million years ago.” Thus the puzzle is complete.

Plate tectonic processes caused the dissection and displacement of the volcano across the South Atlantic Ocean. An enormous volcanic island was formed on the AFFZ about 70 to 80 Million years ago. Shifts along the then active fault dissected the island into a northern part (today’s Richardson Seamount) and a southern part (combined Meteor-Orcadas seamount). At that time the Atlantic was much narrower than today, but it widened by about four and a half centimeters every year due to movements of the tectonic plates. About 60 million years ago, the spreading zone at which new seafloor is formed shifted to the west, splitting up the southern half of the former volcanic island into the Orcadas and Meteor seamounts. These two seamounts moved further and further apart as new seafloor was created between them. 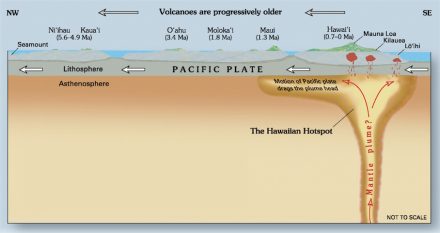 In the Pacific Ocean, in contrast, extinct underwater volcanoes often form narrow chains on the seafloor. The oldest volcanic seamount lies at one end of the chain. The other end of the chain is marked by a young active volcano, which often forms an island. This is the location of the volcanic hotspot from which all the seamounts were formed as the tectonic plate moved slowly over the hotspot. Hawaii is such a hotspot.