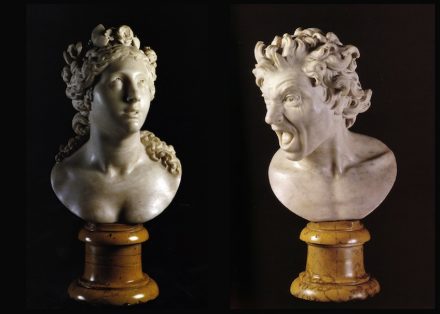 The renowned „Animas“, two marble heads considered one of the most important works of baroque sculptor, painter and architect Gian Lorenzo Bernini’s youth, are not a representation of a Christian soul’s salvation in heaven or punishment in hell (as believed until now), respectively but they really are mythologically themed sculptures: a nymph and a satyr.

This revelation came from David García Cueto, Arts History professor at the University of Granada (UGR), in an article published in the renowned Sculpture Journal magazine, belonging to the University of Liverpool (United Kingdom). In his article, García Cueto comes to the astonishing conclusion about these two renowned sculptures that can be seen at the Spanish Embassy in front of the Holy See (Rome).

The „Anima beata“ had been understood as an expression of the soul having found mercy in the eyes of God. The beautiful lineaments should reveal the inner beauty of the being, so the interpretation. The wide open eyes and the open lips would show innocence.

While the „Anima dannata“ (Circa 1619) should be full of dismay. The screaming of the soul was almost audible, the line of sight was towards the earth.

García Cueto’s statement is based on unpublished documents of that time coming from the Archivio Storico Capitolino (the Roman Historical Archives) in Rome. „This revelation opens the way to a new interpretation of his work, absent in Bernini’s huge historiography until now“, the researcher stresses.

In Greek Mythology, a Nymph was a female minor deity expressing the divine spirit in nature and landscape. Satyr was a companion of Dionysos having fun in drinking, making music and having sex.

Such artworks were typical for Baroque when extreme psychological states were a preferred topic of many artists. Also, contrasts in works belonging together were often expressed.
The first conclusions of García Cueto’s research were published in February 2015 in a conference held at Museo Nacional del Prado (Madrid, Spain) on the occasion of the exhibition „Bernini, Roma y la Monarquía Hispánica, siglos XVI-XVIII“ (HAR2014-52061-P) [Bernini, Rome and the Spanish Monarchy, XVI-XVIII centuries].

Gian Lorenzo Bernini (1598-1680) was an Italian sculptor, architect and painter. He worked in Rome, mainly, and he is considered the most prominent sculptor of his generation and creator of the baroque sculpture style.

Bernini had the ability to express very dramatic narrative scenes in his sculptures. His ability to sculpt marble lead to him being seen as a worthy successor to Michelangelo, and far above other artists of his time such as Alessandro Algardi and François Duquesnoy.