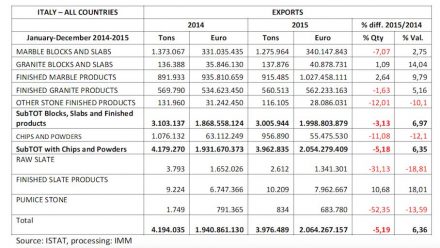 In view of the difficult times, figures could hardly be better: Italy’s stone branch (excluding machinery and tools) took the magical 2 billion € hurdle for exports for the first time since introduction of the €. In numbers: 2.064 billion € were turned over, whereby the magical mark remains vanquished even if chips and powders are left out of the statistic.

The figures were deduced from Internazionale Marmi e Macchine (IMM) Carrara annual statistics.
Translated into US-Dollars, exports totaled 2.329 billion leaving Brazil and Turkey way behind.
Furthermore: relative to the year before exports were up by (+)6.3% despite a downturn in tonnage by (-)5%. The seeming discrepancy is due to a (+)10% price-hike across the board.

Granite exports were also up. 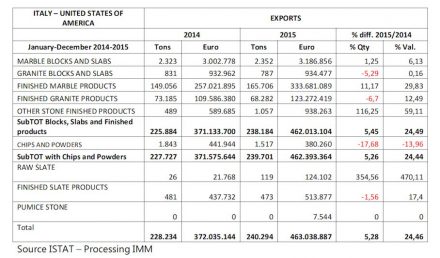 The positive trend continued for exports to the USA was not least due to efforts by IMM Carrara President Fabio Felici: „Close collaboration with the Marble Institute of America and the ICE has led to the selection of the best US operators and architects invited by our trade fair to attend a B2B event organized in detail with an advanced matchmaking software.”

To which we add: the Marble Institute (MIA) cooperates with a number on national organizations, e.g. Brazil’s Abirochas or Spain’s Macael-Trade-Organization which even awarded a prize to MIA. At this year’s Coverings a delegation of representatives of the China Stone Material Association had arrived to learn about the proper handling and treatment of well-to-do clients and the US-market. 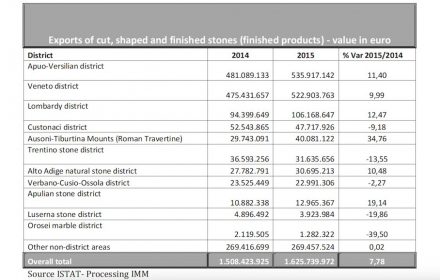 The table shows distribution of exports split up by Italy’s districts. 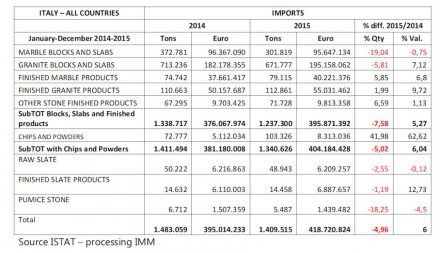 As far as imports are concerned, negative growth in raw material and an increase in value added products were remarkable. This may be the beginning of a new trend according to IMM Carrera. „However, in general, these were finished products with a low added value for which our companies tend more and more often to look abroad.“

I.e. sawing blocks – an activity which produces a great amount of offal will be left for other countries to carry out.

At the Xiamen trade Fair we heard, that China also no-longer wants to import offal.