Stairwell in natural stone with a 320° twist 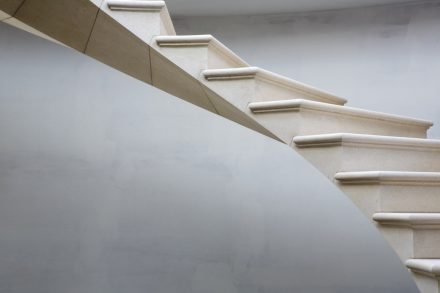 The Stonemasonry Company, based in Great Britain, deploys taught steel ropes for the construction of its spiral stairwell

It has always been the architect’s wish to construct light, harmonious ascending structures – a kind of imaginary stairway to heaven to help mankind out of the tedium of everyday life – according to the project description by The Stonemasonry Company of Great Britain. In fact, the company’s stone masons have constructed a stairwell which realizes the idea perfectly: the steps spiral upwardly revolving around an imaginary axel.

The secret behind the construction in a Cheshire-domicile in England’s Northwest is the hidden steel rope stabilization made possible thanks to modern engineering.
Two parallel, 12 mm thick, steel ropes are spanned through the steps. A force of some 15 t is applied to each of the ropes.

The technical term is post-tensioned, i.e. spanned after mounting. The term pre-tensioned is sometimes used erroneously. The ropes can, of course, only be pulled taught once the stairs have been mounted on scaffolding particularly since our stairwell extends over two stories. 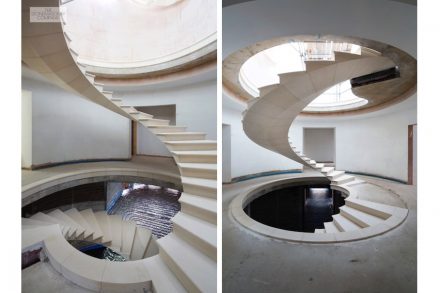 The ropes are spanned with the aid of hydraulic jacks. Special fastenings at the end of each rope ensure constant tension and allow the ropes to be firmly anchored in steel plates.

The Stonemasonry’s craftsmen, based in Lincolnshire, have been experimenting with this type of construction since 2010 and have since erected 8 post-tensioned stairwells as well as 6 steel-rope-reinforced stairs.

The seeming lightness of the construction rests upon heavy thinking. 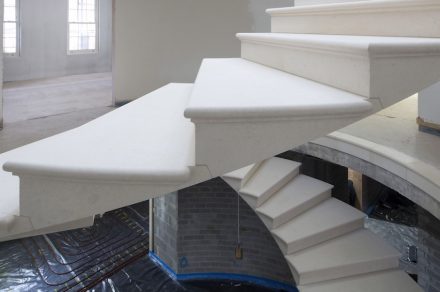 Choice of suitable stone for the required specifications is of utmost importance and must be tested prior to commencing construction lest the tension of the steel ropes causes the stone to clack. The density of material is the key. In the case at hand, the experts decided to use French Combe Brune limestone.

The thickness-to-weight-ratio or volume/mass must be optimized to achieve a perfect balance between tension of the rope and slope of the stairs. Each step, is, after all, 1.30 m wide and weighs 150 kg or a total of 6.6 t per story.

Also, the exact spot must be calculated where the steel rope is threaded through the steps.

The holes through which the ropes are threaded must be drilled with utmost precision.

Pierre Bidaud, The Stonemasonry’s project manager never tires of emphasizing the importance of Webb Yates Engineers’ part in the project. „We have worked with them for 8 years. They develop all the engineering with us.“

But in truth the greatest portion of the construction’s stability rests not on the steel rope but on the mass of the stone steps themselves. The steps are stopped by gravity and their anchoring at top and bottom. The principle is known from arch-bridges in which the entire construction is held in place by gravity and the keystone wedged in last. The steel ropes replace the function of the keystone.

Bidaud mentions that his project is based on similar constructions from France, Great Britain and the work of Bari University’s Professor Giuseppe Fallacara.
The architect responsible was Stephen Lavin. 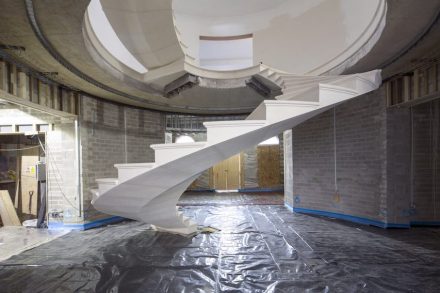 Piecing the steps together required no special solution. „We have a normal rebating system on the steps like any cantilever staircase“, according to Pierre Bidaud.

And finally: is this really the first such construction world-wide as written in the project description?

We don’t know for sure and the participants play down the claim with typical British humor. The photo-gallery compiled during the building process includes Jacob ’s ladder by artist William Blake painted with some help from the Angels above.
„We are just missing the Angels!“ they write tongue in cheek. 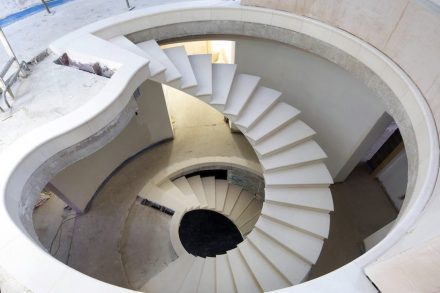 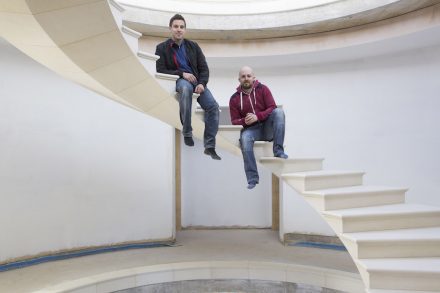