News from inner earth: enormous amounts of liquid oxygen must be there 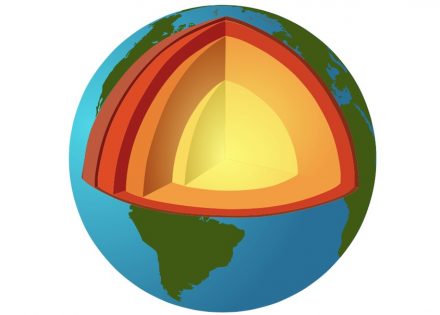 In the inner earth there must be enormous amounts of oxygen in liquid form due to high pressure and extreme temperatures. How the element, which is extremely reactive at the surface of the planet, act there in the geochemical processes there is not known yet.

A group of researchers led by Dr. Elena Bykova from the University of Bayreuth came on the track of the oxygen in a depth of around 1500 km by exposing normal iron oxygens from the earth crust to special high-pressure chambers at the Deutsches Elektronen-Synchrotron Desy in Hamburg. In these experiments were created iron oxides which had never been seen before and whose descriptions look like little calculations: At a pressure of 70 gigapascals, corresponding to about 1670 kilometers below the surface, Fe3O4 (magnetite) decomposed and formed another new iron oxide, Fe25O32. 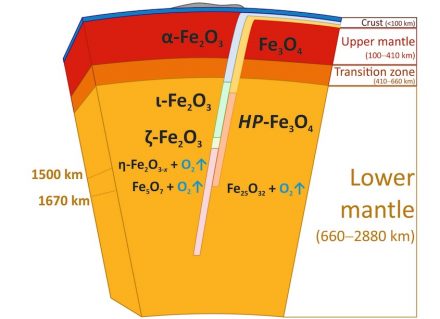 Typical for all this processes is that oxygen is released. Logically, enormous amounts of the element must be existing in a depth of around 1500 km, in liquid form due to the high pressure there.

Similar measurements had been made at the European Synchrotron Radiation Source ESRF in France and at the Advanced Photon Source APS in the US.

Iron oxides can be carried deep into the Earth’s mantle via subduction, when a tectonic plate dives under another. Hematite and magnetite are major components of so-called Banded Iron Formations (BIFs) and ironstones, huge sedimentary rock formations occurring on all continents. These formations may reach up to several hundred meters in thickness and hundreds of kilometers in length. Deposited in the world’s oceans about two billions years ago, Banded Iron Formations form parts of the ocean floor.

By subduction iron oxides from the surface are transported to great depths, possibly extending to the core-mantle boundary region. 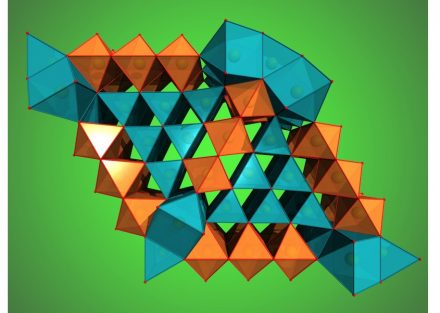