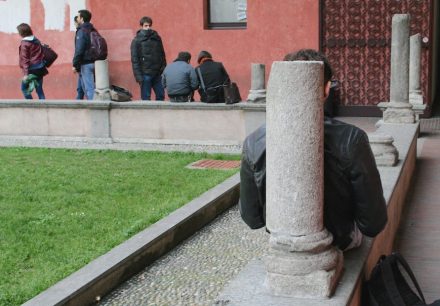 A working group comprising members of various European countries has put together learning modules on how to lay natural stone flooring and clad walls and façades in natural stone. These are flash-card videos, graphics and data sheets ready to download from a webpage bearing the title „Stone Placing“. Some are available in a number of languages.

Admittedly the level of craftsmanship shown is not commensurate with the know-how of trained craftsmen in some European countries. But the point was to convey the skills on the basis of a lowest common denominator.

The themes are oriented along typical works faced by stonemasons. E.g. one video (Flash-Cards) shows how to build a fire-place, another is about building a balcony parapet, and yet another about transposing a gravestone, etc.
One over-all important aspect is labor-safety.

Reiner Krug of Germany’s Naturwerkstein Verband (DNV), responsible for coordinating the project, states a special aspect of the compiled learning material: „The material could help some of the many fugitives now settling in Europe find their way to gainful employment.“

The EU explicitly allows countries outside the European Community to translate the material and use it. „Interested Trade Organizations should turn to one of the institutions named bellow“, according to Reiner Krug.

A remarkable amount of labor was invested by Trade Organizations involved. In less than two years they have formulated and introduced a pan-European code of minimum standards for stonemasons. Accordingly, Krug’s praise for participating contributors is abundant.

We recommend starting with the videos (Flash Cards) each of which lasts but a few minutes. They can be found on the bottom right of the home-page.

Right top, one can choose the language although some contributions are still awaiting translation.