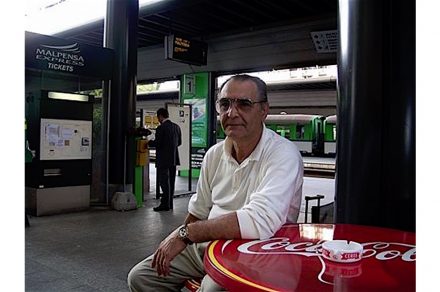 Latest news: Emanuel Mateus de Castro, founder of the Brazilian trade journal Rochas de Qualidade, passed away on July 30, 2016. During decades, he had played an important role in the country’s stone sector, starting initiatives like the showroom for Brazilian Stones in Congonhas, São Paulo. In his last years, he was very ill. The photo we copied from Facebook does not really picture the powerful Emanuel who once had been present on every important stone fair in the world. Brazil’s stone association Abirochas writes: „Accustomed to the always witty presence of Emanuel in the events industry, we feel his absence but his name will always be remembered as a reference.“

UNESCO adds 8 locations to the list of World Heritage Sites. Stone is represented in the Volcanic Islands of the Archipiélago de Revillagigedo on Mexico’s pacific coast, the fossil deposits at Canada’s Mistaken Point, and Chad’s sandstone Ennedi-Massiv. Newcomers to the list are also Spain’s Antequera Dolmes as well as the Antigua Naval Dockyard and Barbuda (1, 2).

Latest news: Under the title „United Today, Moving Forward“ the Aegean Exporters’ Associations (EIB) have published a statement concerning the situation in Turkey.

Federation of Indian Granite and Stone Industry’s (FIGSI) president R Sekar gave an inside look into the country’s stone sector, in an interview with Deccan Herald.

Team V Architektuur was chosen to construct a 21-story high-rise (73 m) made of wood in the Netherlands. Construction was scheduled to begin 2017.

A house on the edge of a defunct quarry has been built by Czech architects of A69 architekti.

Sand taken with by tourists as souvenir from Sardinia is confiscated at Cagliari airport as a case of theft of natural heritage, the British Telegraph reports.

Owners of quarries and villagers are in conflict in Vellore, Tamil Nadu state of India. The villagers say that indiscriminate activity, including frequent blasting, had affected the water bodies in the settlement and several houses developed cracks. Times of India reports that quarry owners threatened the protestors.

Added color value to stone, is a constant point of controversy in architecture. In this context we show the reception area of Germany’s University of Constance on the banks of Lake Constance where ordinary cobble stone is given an extra dimension by colored Plexiglas triangles. The colorful ensemble is the work of artist Otto Piene.

An unusual natural stone inlay in the lobby of a hotel is shown on the webpage of Luíz Sánches Díez.

Rich McCor adds a touch of comic to well-known buildings.

Video of the month: the term marble is ambiguous in the English language meaning the stone type as well as a sphere usually made of glass. The Swedish band by the name of Wintergatan has constructed a fantastic instrument using 2000 metal marbles (1, 2).