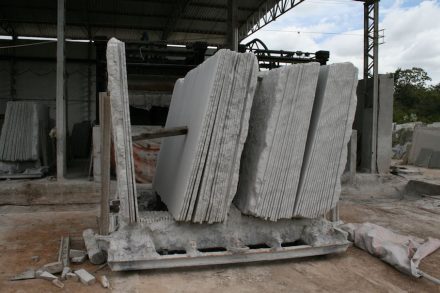 Many countries are pursuing carbon capture as part of their strategy to reduce global emissions of carbon dioxide (CO2), a major greenhouse gas. One of the most promising technologies to do this is called calcium looping. The process scrubs CO2 from flue gases by using calcium-oxide-based sorbents. But current sorbents – natural or synthetic – are either expensive or lose their effectiveness over many cycles.

So scientists are investigating alternate materials, including industrial byproducts. If successful, this route could help clean up both carbon emissions and waste at the same time.

Carla I.C. Pinheiro and colleagues from the Centro de Química Estrutural (CQE) at the Universidade de Lisboa wanted to test this strategy using the powder waste created in large amounts by cutting and polishing marble, a popular stone for such uses as countertops and flooring. They report in ACS’ journal Industrial & Engineering Chemistry Research about their reesearch.

In lab-scale testing, the researchers found that waste marble powder from Portuguese stones performed better than current commercial calcium-carbonate sorbents as a material for capturing CO2. The marble powder initially showed about 90 percent of carbonation conversion compared to 78 percent by the commercial sorbent. And over 10 cycles of reuse, the powder sorbent’s reactivity declined by about 36 to 44 percent while the commercial material’s performance dropped by 50 percent.