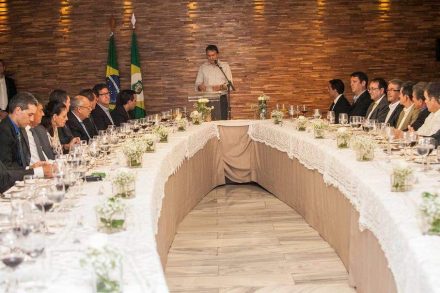 Ceará (CE) is becoming Brazil’s new natural stone center for quarrying and processing. Local Trade Organization Simagran-CE which has recently started up its own Trade Fair by the name Fortaleza Brazil Stone Fair, not only survived the ongoing crisis in the country, the branch also enjoys government support: the Free Trade Zone (Zona de Processamento de Exportação, ZPE) has reserved some 300 hectares in the Port of Pecém for stone producing companies.

The space provides facilities and a location for effective export of granite, quartzite and limestone from the Brazilian backlands to be processed and prepared for export to the USA. To date, most of the raw blocks were exported to the Province of Espírito Santo some 1,800 km south only to be shipped back to the northern hemisphere after value-added processing.

A sign of governmental support can be seen in the dinner given for representatives of various companies by Camilo Santana, Governor of the Province of Ceará, in the official residence on the occasion of the Fair’s (May 31st to June 3rd 2016) opening. The highlight of the evening was the signing of the Free Trade Agreement by Guidoni – a giant in the natural stone branch. 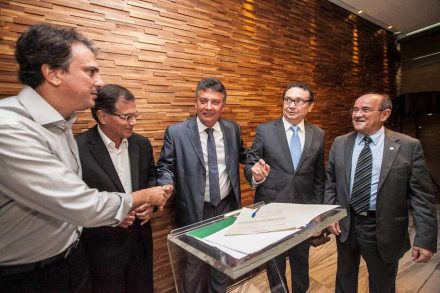 Conditions in such a Free Trade Zone are highly favorable: tax is low and billing can be made out in foreign currency. Quarries are no more than 170 km away and Port of Pecém is right next door.

At the same time stone production in Ceará is increasing continuously. 2015 saw exports valued at 18.5 million US-$ leave Ceará. That was an increase of approx. one third over 2014. „We are expecting a turnover of natural stone of some 200 million US-$ in 2020 to be processed via the harbor“ says Carlos Rubens Araujo Alencar, President of Simagran-CE. 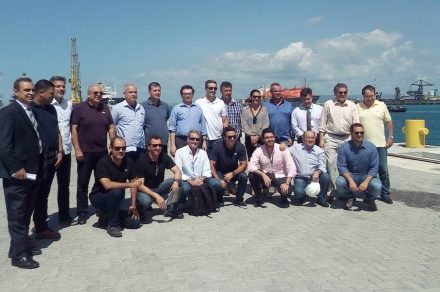 But the fledgling Fortaleza Brazil Stone Fair suffered under Brazil’s political and economic instability. Of the 62 exhibitors acquired in December for the 2016 edition, many withdrew in the following months.

In the end a mere 35 exhibitors were left on an area of 4500 m² at this second edition of the Fair.

The upcoming edition to be held from June 01 – 03, 2017 will be reduced by three days, the last of which falls on a Saturday. It is hoped that this will facilitate visits by local stonemasons.

Opening hours of the Fair are from 3 p.m. to 10 p.m. as has been the case of the Vitória Stone Fair in the South of the country for some years.

There seems to be no fear of competition from his side in Ceará, at least officially. Governor Camilo Santana stressed that „by no means is it the intention to compete with the South, but rather to increase business by creating synergies and new fields of activity“ according to a press release.

Carlos Rubens Alencar struck a similar note: the Fair in Fortaleza is geared toward granite and quartzite from Ceará and is aimed at architecture and design. These stones are called „Exóticos“ or „Superexóticos“ distinguished by strong color and structures otherwise seen only in softer marble or onyx.