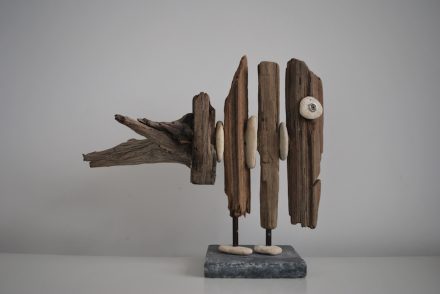 A passionate surfer, Dijker finds the components for his works of art stranded on the beaches near his home and abroad

Whenever Marcel Dijker goes surfing he always takes an empty back-pack along. He fills his rucksack with stranded driftwood, seashells, and whatever washes ashore, and brings the bounty to his studio where pieces are transformed into small works of art. Sometimes a fish, which, with a little imagination, actually resembles real types of fish ensues. Sometimes the pieces morph to become fantastic creatures from the depth of the oceans. 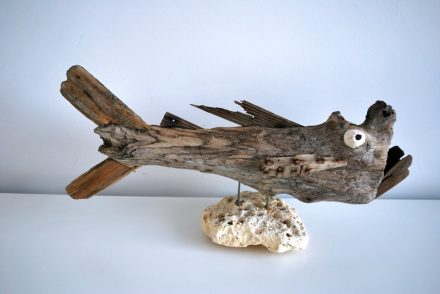 Dijker, an engineer by vocation, was raised on the Dutch Isle of Texel. Already in his early years, he found fascination in stranded debris.

Turning these into small works of art began by-the-way but became increasingly with him. He is a self-taught artist. 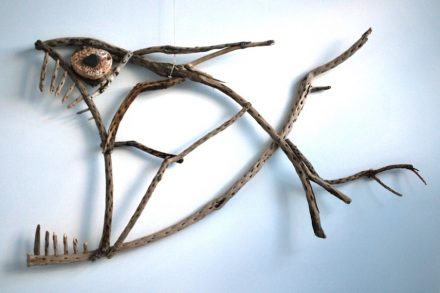 A closer look at the material used reveals its fascinating background: no-one knows where it came from or how it got to where it was found and picked up most likely from far away across the ocean. What is obvious, however, is the power exerted by sunlight, wind, and currents having bleached and leached branches with foliage and precisely sawed wooden boards alike and unrelentingly.

It is the shapes that fascinate and inspire Dijker. Whenever a piece catches his eye, he takes it along, cleans and dries it. Then he contemplates the piece hoping for inspiration. „That’s when a new art piece was born“, he writes.

He then proceeds to complete the piece using other items from stock. 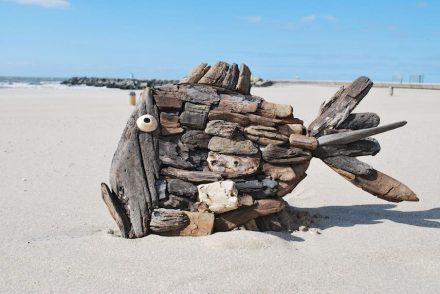 Apart from wood, he also uses stones found washed ashore, often for the body of his creations or as a foot. Strandstone is one such material which might have originated from way up high in the mountains and taken on an unknown path before being found.
A certain type of seashell is ideal for use as fish eyes. Steel also finds its way into the pieces.

On the other hand, Dijker has no use for waste products of our civilization. „Their colors are not natural“, he writes.

Never mind that the beaches are cleaned during the tourist season. The remaining months of the year offer a reliable supply. As an experienced surfer, Dijker often ends up on deserted beaches whenever the best wave takes him there. Here the treasures of nature are free for the picking.