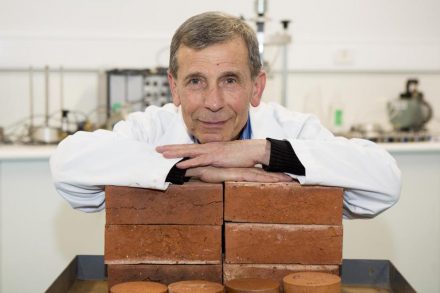 As butts have poor biodegradability, it can take many years for them to break down, while heavy metals such as arsenic, chromium, nickel and cadmium trapped in the filters leach into soil and waterways.

Now a team at RMIT University at Melbourne, Australia led by Dr Abbas Mohajerani has demonstrated that bricks with as little as 1 per cent cigarette butt content can cut brick production costs and save the environment.

Mohajerani, a senior lecturer in RMIT’s School of Engineering, said: „I have been dreaming for many years about finding sustainable and practical methods for solving the problem of cigarette butt pollution.

„About 6 trillion cigarettes are produced every year, leading to 1.2 million tons of cigarette butt waste. These figures are expected to increase by more than 50 per cent by 2025, mainly due to an increase in world population.

„In Australia alone, people smoke about 25 to 30 billion filtered cigarettes a year and, of these, about 7 billion are littered. This research shows that if just 2.5 per cent of the world’s annual brick production incorporated 1 per cent cigarette butts, we could completely offset annual worldwide cigarette production.“

Mohajerani’s team discovered that adding butts can cut the energy needed to fire bricks by up to 58 per cent.

During firing, heavy metals and other pollutants in cigarette butts are trapped and immobilized in the bricks, reducing problems caused by leaching.

Mohajerani said: „Incorporating butts into bricks can effectively solve a global litter problem as recycled cigarette butts can be placed in bricks without any fear of leaching or contamination.

„They are also cheaper to produce in terms of energy requirements, and as more butts are incorporated, the energy cost decreases further.“