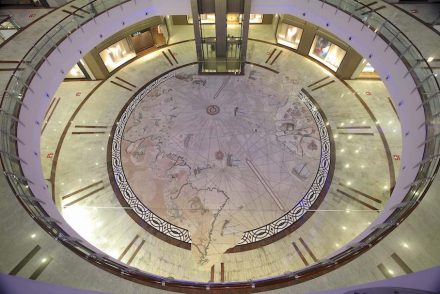 Mosaics are among the most ancient artistic media implementing natural stone. Some examples date back two millennia. Piri Reis’ nautical map, which adorns Ankara’s Panora Mall, is celebrating its tenth anniversary next year.

The Mall’s entrance-hall, frequented by thousands of shoes as well as the occasional automobile or gym exerciser, enjoys its aesthetic up-grading. 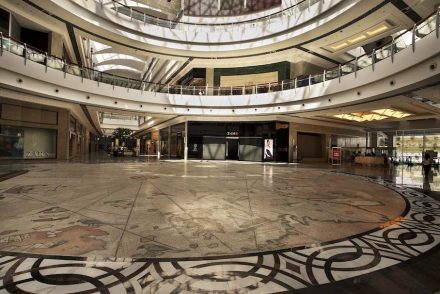 The map is a reproduction mainly of the South Atlantic with the coastline of South America and Africa, and is astonishing in detail and precision. The Original map was drawn in 1513 by the famous Turkish explorer Piri Reis, i.e. a mere two decades after the discovery of America. More on the subject later.

The design and draft layout as well as the realization of the mosaic were taken on by Akdo Company, a subsidiary of the mega stone producer Silkar Company. The Akdo Creative Director’s Team, led by Metin Ünsal, revised the original map, simplified it and enlarged the layout some 240 times.

The original map is a mere book-sized sketch on a piece of camel-parchment, parts of which are closely covered in writing.

In a second phase which took four months to complete, the 25 Akdo Specialists picked 49 types of natural stone in as many colors, carved and cut some 3.2 million single pieces each 1×1 cm in size and assembled them in the company’s hall. 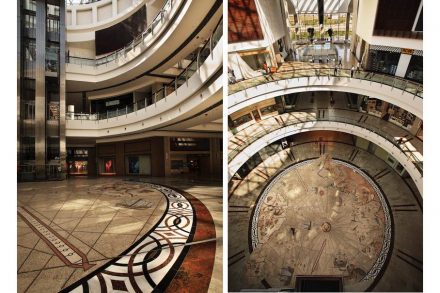 The entire mosaic measures 20 m in diameter and covers an area of 315 m².
After preliminary assembly, the complete map was split into several segments and transported to the shopping center where it was installed as the flooring of the entrance hall.

Let turn our attention to Piri Reis and his map.

No doubt it was originally thought to aid sea-farers navigate the Atlantic and was chock-full of navigational aids.

Note with what precision and Antarctic Coastlines are mapped – although the existence of the Continental South Pole was not yet documented at the time.
Historians presume that Piri Reis referred not only to nautical maps from around the time of Alexander the Great as he wrote himself, but also acquired the most recent information from contemporary seafarers.

A vague referral to Christopher Columbus, who was the first documented European to set foot in Central America, is included in Piri Reis’ documentation. 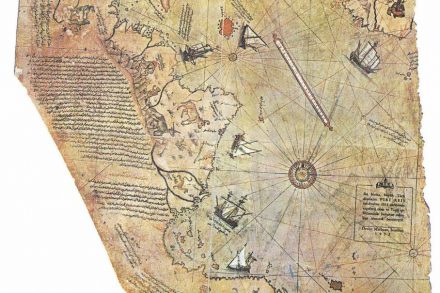 But the Portuguese explorer Pedro Álvares Cabral is not mentioned. By chance he had discovered what is today Brazil: as was Christopher Columbus before him, Cabral was actually on an expedition to discover a passage to India via die Atlantic and was hoping to make use of the prevailing and streams of the southern hemisphere to expedite the journey around the Cape of Good Hope on Africa’s southern tip.

This detour later established itself as the Portuguese route to India – they may even have ventured into the Polar Sea during the course of the next 10 years.
Piri Reis, in any event, held profuse contact to these explorers: on order of his Sultan he frequently pirated Portuguese bastions in the Indian Ocean en route to the Spice Islands around India.

Sultan Suleiman is said to have been enraged and had his admiral convicted to death, according to Wikipedia. At the ripe age of 84 Piri Reis was publicly beheaded.

His famous nautical map was discovered by coincidence in 1929 in the Topkapi Palace Library in Istanbul.