Warning: session_start(): Failed to read session data: files (path: /var/lib/php/sessions) in /home/www/wordpress/wp-content/themes/stone-ideas/functions.php on line 10
 Just in time for William Shakespeare’s 400th anniversary of his death: „Not marble, nor the gilded monuments“ - Stone-ideas.com

Just in time for William Shakespeare’s 400th anniversary of his death: „Not marble, nor the gilded monuments“ 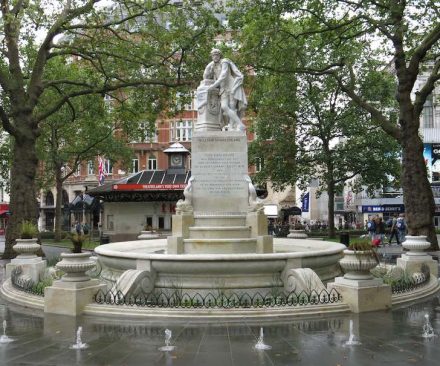 In his famous sonnet, the poet reasons that he could help others to achieve fame and immortality

On the occasion of Dante Alighieri’s 750th anniversary, it was easy to find references to stone by Italy’s official state poet. This year marks the 400th anniversary of William Shakespeare’s death (1564-1616). He, too, often referred to stone in his works.

Or in Macbeth the eerie metaphor: „For the stone shall cry out of the wall and the beam out of the timber shall answer it, woe unto him that buildeth a town with blood“.

Also:
* „Be this the wetstone of your sword. Let grief convert to anger. Blunt not the heart to enrage it.“
* „If thou be the Son of God, cast thyself down: for it is written, He shall give his angels charge concerning thee; and in their hands they shall bear thee up, lest at any time thou dash thy foot against a stone.”
* „Thou sure and firm-set earth, hear not my steps, which way they walk, for fear thy very stones prate of my whereabouts.”

In his poem made up of 14 lines with a fixed rhythm, i.e. the sonnet structure carrying the number 55, Shakespeare begins with „Not marble, nor the gilded monuments.“ 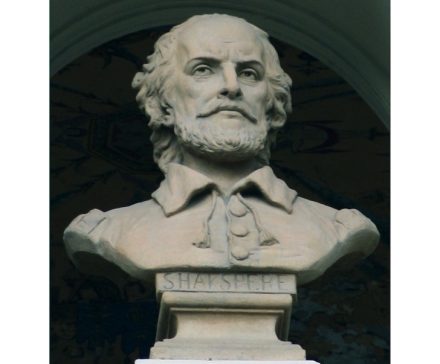 The poet pores over the power given to him by his calling. Addressing an imaginary listener, he reasons that not costly or mighty monuments can guarantee that a person will be remembered as the despite the passing of time: ‘gainst death and all-obvious enmity shall you pace forth; your praise shall still find room even in the eyes of all posterity that wear this world out to the ending doom can destroy’.

In an impassioned burst of confidence Shakespeare claims to have the power to keep his friend’s memory alive for evermore.

The idea is not new – many poets have written on the subject of immortality through verse.
But Shakespeare gives the notion a new twist in immortalizing a third party with his poetry and resulting fame.

What distinguishes Shakespeare is that he values the identity of the beloved; he recognizes that the beloved has his own personal immortality, in no way dependent on poetry. 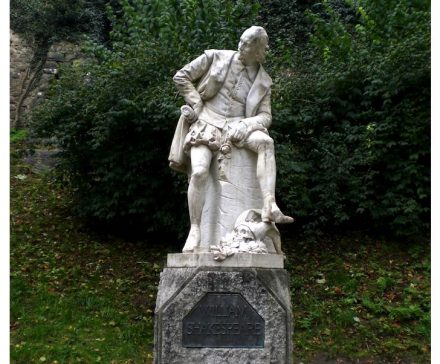 So far so good: but how does this translate into new-speak? Could Shakespeare have been a precursor of modern-day public relations activities?

In any event all of Shakespeare’s characters, whether fictional or real have achieved fame and immortality though the poet’s pen, be it Henry VIII, The Merchant of Venice, and last but not least, Romeo and Juliette.

The unhappy lovers bring us full circle back to stone. The story plays in Verona where the streets are paved with Rosso Verona Marble polished by the wear of time.

To underscore our thoughts we show pictures of some Shakespeare-Monuments.

By the way: China is celebrating the 400th day of Tang Xianzu’s death, a famous Chinese poet. In England joint events for both poets as reported by The Telegraph.