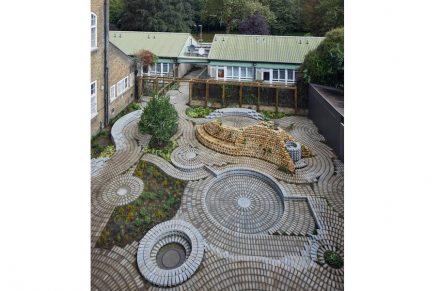 Circles made of York stone and bricks create discreet spaces or notional rooms to be used for sitting, eating or displaying other artists’ works

York stone and bricks are the materials of the South London Gallery’s (SLG) new permanent garden. It has been created over the past two years by Mexican artist Gabriel Orozco, with support from 6a architects and horticulturists at the Royal Botanic Gardens, Kew.

Orozco had never before designed a garden, but embraced the challenge of transforming a largely inaccessible paved area of land at the back of the SLG’s main building into a unique sculptural work as part of his artistic practice.

As circles play an important role in his works they also appear in his design for the garden. 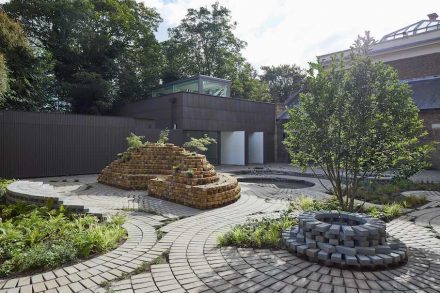 Establishing a tension between symmetry and asymmetry, a geometry of intertwining circles intricately outlined in brick dimensioned York stone subtly maps a series of discreet spaces or notional rooms. Each is lent its own distinctive character through slight shifts in form or by being at different levels, variously planted or featuring seating, a sink, water butt or welcome bowl built up from the stone bricks.

The various levels and spaces can be used interchangeably for sitting, eating, playing or showing work by other artists, reflecting the multiple activities the garden will be used for.

The choice of materials was drawn from the language of the gallery’s Victorian building. Orozco decided to include a feature at the center of the garden which is made of original Victorian bricks reclaimed from recent building works at the South London Gallery (the gallery dates from 1891) in addition to extra bricks from that period which were sourced from a local yard in London.

Playing on the idea of an urban ruin, the garden will gradually evolve to become rambling and overgrown with different grasses, low level creepers and fragrant plants. 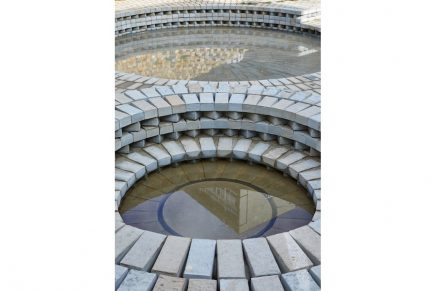 An important feature of the garden is a new planted walkway providing a direct point of access for residents of Sceaux Gardens housing estate, where the SLG has run art programmes for a number of years, including a new welcome area called the Fox Reception. The garden is open to the public every weekend and will be used by invited groups during the week.

Gabriel Orozco, who was born in Mexico and currently lives in Tokyo is one of the leading artists of his generation. He has exhibited extensively internationally and periodically in London including a major mid-career retrospective at Tate Modern in 2011.

York stone is a sandstone from quarries in Yorkshire having been used as one of Britain’s favorite choice of paving stone. The supplier for Orozco’s garden war Marshalls company.

In the galleries of the first floor, working drawings and a film capturing the transformation of the garden are shown until 8 January 2017.