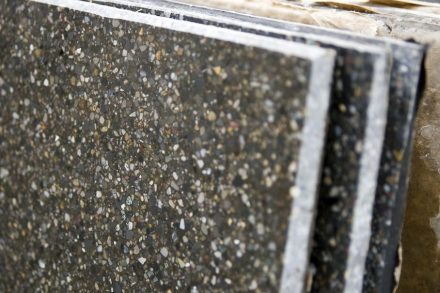 The natural stone branch argues – for marketing purposes – that it bears homeland stone.

The material is gathered by CEM Ambiente Spa in about 50 municipalities in Milan’s hinterland, cleaned, sorted and subsequently added to adhesive resin by Stone Italiana turning it to „DNA Urbano“ Engineered Stone. 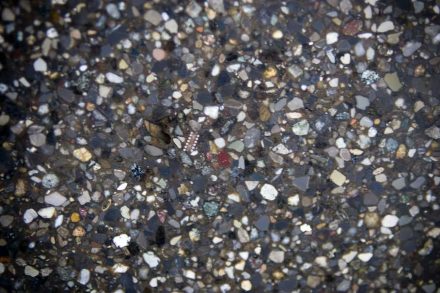 Nomen est omen: the name implies that the basis for DNA Urbano is the basis of urban life itself – in the slabs one might find a fragment of sunglasses, a tiny piece of a circuit board or even a few centimeters of wire.

But a multitude of such fragments alone is not suitable for producing flooring or wall cladding. A certain percentage of quartz sand must be added to ensure that the gaps are filled and 6-7% resin must complete the recipe.

With this recipe DNA Urbano the right to bear the European Ecolabel. After all, the starting point is 100% recycled material.

The material has some similarity with Terrazzo, which incorporates gravel in concrete.

Stone Italiana was founded in 1979 and was by its own claim the first company in the world producing engineered stone. „Over the years, our production has been a reflection of a new way of perceiving and using stone, something much like a semantic revolution“, according to a press release.

It was never the intent to imitate nature. The core idea was to discover innovative uses for stone.

The company entertains its headquarters in Zimella in the province Verona and has a showroom only a couple of steps away from the Milan Cathedral in Via degli Arcimboldi, 5, 20123 Milano.

One could imagine tourist scraping bits of marble from the façade to have it converted to a memorabilia from the trip to Europe.