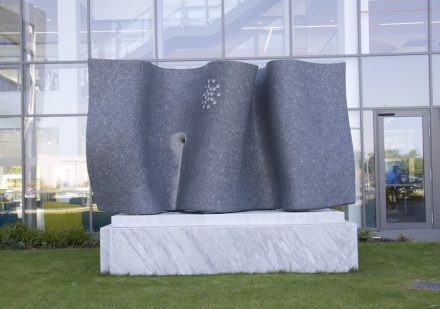 The object is placed at the Volkswagen Financial Services in Milton Keynes. The commissioner was UK & European Investments. 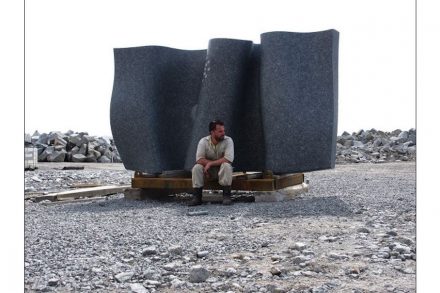 In his blog, the artist reports about the work in the Tvedahlen quarry together with stone carver Raphael Beil: „Monday morning we started with the carving work. I had prepared top and bottom projection templates of the sculpture in my London studio, they were sprayed in the correct position onto the block … Cutting is done with an over sized diamond cutter, the blade is water cooled, the cuts are chipped of using a sledge hammer. This is the toughest part of the production, it is brute force and endurance…“ 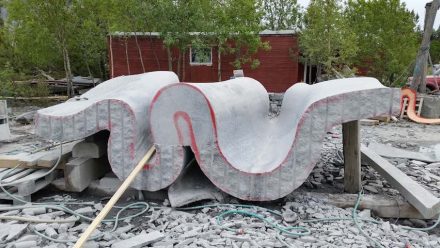 It has been an incredible journey, with 2 blokes turning up in 2 cars full of tools, and transforming a 30 ton block of granite into this. Right now, I feel strangely emotional…“

The nest step was to realize the base in Carrara. 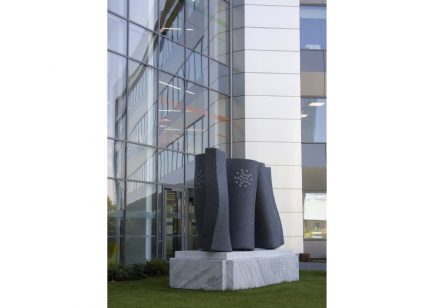 By the way: Milton Keynes is one the New Towns built in the UK in the 1960ies. Its name does not reflect neither the poet John Milton nor the economists Milton Friedman or John Maynard Keynes but a village which had been existing at the site since the 11th century. Its location is in Buckinghamshire in South East England, for foreigners: right in the middle of England.