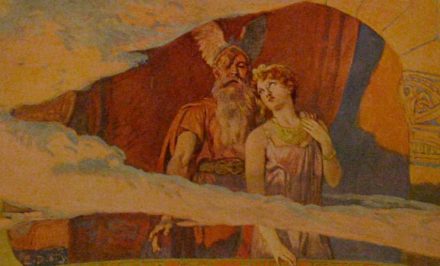 In Iceland a temple for the mythological Nordic Deities is being erected for the first time. Stone is involved inasmuch as the holy place is set in a cliff with a view on the capital Reykjavik. Thor Granitos, which has nothing in common with the temple, entertains its headquarters in Brazil (1, 2, 3).

Painful at first, but wholesome for the entire body after some getting used to according the producers of sandals which make you walk on pebbles.

The Carlyle Group has completed the acquisition of Cupa Group, a Spain-based natural stone company. Carlyle is a private equity which invests money from other people or companies.

A 1:1 replica of the Parthenon temple made of marble on the Acropolis will be clad by banned books from all over the world during the documenta 14 in Kassel, Germany during 2017. The Argentinian artist Marta Minujín intends to create a symbol of resistance to any banning of writings and the persecution of their authors. Donations of such books are welcome.

Gravestone maintenance is a topic in a report from the US.

As „transitional European with natural stone and stucco“ the developer describes a 350-unit apartment community in San Francisco. The construction has been kicked off these days.

The Sucola die Scultura in Peccia in Switzerland has put online its sculpting courses for 2017.

Fossilized Dinosaur footprint as large as a man found in Gobi Desert.

British architect Níall McLaughlin has received the 2016 Riba Charles Jencks Award for Architecture. One of his works is the Bishop Edward King Chapel of Oxfordshire’s Cuddesdon College.

A hunting lodge in the Czech Republic has been clad in gabions by BASArch Architects.

Natural stone fireplaces are shown on Tamboré Mármores Company webpage. The Company has its headquarters in Brazil’s metropolis São Paulo.

Video of the Month: Demolition of buildings, artistically upgraded.