Travertine island in the middle of a sea of blue resin 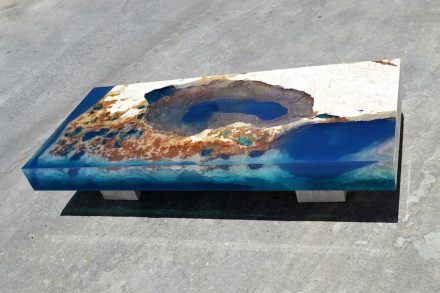 French designers originating from the Antillean Island of St.-Martin have created a dream of a coffee table

The idea is close at hand and maybe one need only to live in the Caribbean to come up with it. Alexandre Chapellin founded the La Table Company together with Patrick Lapierre. The company distributes the low set coffee table of a special kind. „Lagoon“, e.g., emulates an island in the middle of a deep blue tropical sea.

The trick is the combination of light travertine nestled in blue resin: the designer-duo wed the two materials in such a way that the mind’s eye automatically conjures a picture of a Caribbean island. 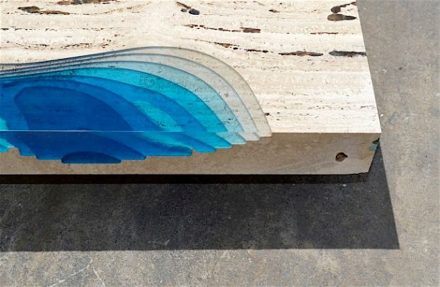 In some models, the effect is even intensified by contour lines worked into the stone, as if the beach descends into the depths of the blue ocean.

The philosophy behind the furnishing: creations are meant to be out of the ordinary and have a soul and a story to tell, as can be read on the company’s homepage, i.e.: that the table wants to provide a glimpse into the world of its owner.

It might be his love of the ocean, but can be much more than that: on commission, La Table will imbed an item, e.g. a boat’s motor, into the resin to transform it to a unique bespoke table. 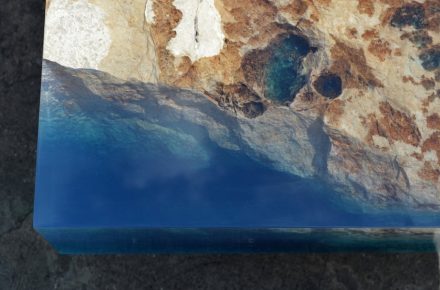 In a video Chapellin describes the many stages in his career covering a wide palate of activities. At one point, he decided to converge his experience and turned to design. His partner, Patrick Lapierre, adds design experience and stone-crafting skills.

The production site is situated in Hope-Estate, a district of the Antillean island of St.-Martin. 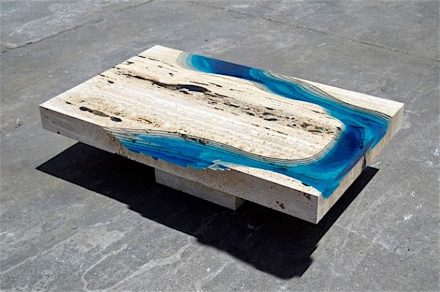 Might we add: the tabletop is a brilliant idea – but the legs of the table could be perfected.

The fact that there is no travertine to be found in the oceans is secondary in nature. This special type of limestone can be found only on land, where water rises from the depths transporting dissolved lime, which is then released. The lime is deposited in clearly visible layers with holes and veins.