The Armadillo Vault at this year’s Venice Biennale: hovering stone puzzle comprising 399 elements and a mass of 24 t 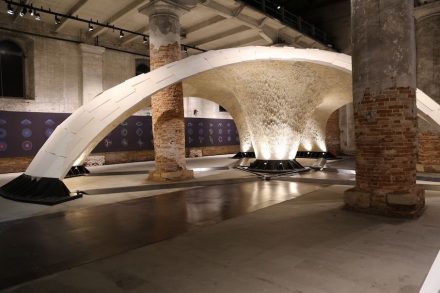 The armadillo, a prehistoric animal, which has survived to this day, is the model for Armadillo Vault. Its name translates to „little armored one”. The construction can be seen until November 27th 2017 at the Venice Biennale. Armadillo Vault, as its namesake, goes way back in time. The vault’s ancient construction principles are as simple as they are effective: the mass of the material and the downward pull of gravity keep the stone construction stable thanks to its own weight – a principle used in building of bridges and stone vaults for centuries.

A suitable oxymoron could be: „back to the future“. However, in the case of Armadillo, the inherent contradiction is projected to an even higher level by computer-assisted calculation, planning, and structures never even dreamed of by ancient craftsmen.

The Armadillo Vault, strategically placed in Venice’s historic Corderie dell’Arsenale, spans a length of 16 m and covers a surface of some 75 m². Its 399 pieces rest in themselves without the aid of a base construction. It also incorporates two pillars of the hall enclosing them thanks to elegantly positioned cutouts.

Note: the construction is not tensioned as one might expect, e.g. with the aid of steel ropes threaded through the stone. The mere 24-t-mass is all that keeps the stone puzzle stable and all pieces in place.

The draft is the work of the Block Research Group led by Professor Philippe Block of the ETH Zurich. Computer animation was realized by Ochsendorf Delong & Block (ODB Engineering) with Matthew DeJong (Professor of the University of Cambridge), John Ochsendorf (Professor at Massachusetts Institute of Technology), and again Philippe Block as well as Anjali Mehrotra.

Pieces of the puzzle are the work of Texas-based Escobedo Group and cut from limestone blocks. They were initially pieced together in the city of Buda and disassembled for shipping to Venice one at a time where they were re-assembled within a mere three weeks.

At the end of the Biennale, the vault will be shipped to another venue. The almost unlimited mobility of the building and recyclability are distinguishing factors, which make this type of construction so attractive in the present time.

The ecological footprint, as determined by release of CO2, is reduced by 90%: Such shapes are usually held together by means of steel-reinforced concrete.
No mortice is to be found between the pieces of the puzzle. The installation was initially laid out over a standard scaffold, which was removed when the last stone was set in place. 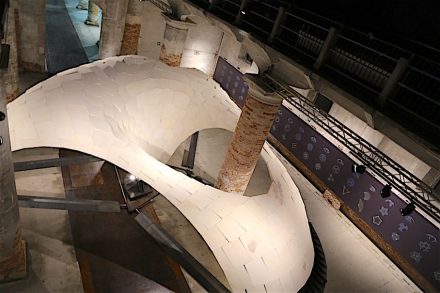 The shape of the puzzle pieces and their arrangement was determined by the construction itself. It is only with the aid of the computer calculation that Armadillo Vault construction is made possible.

We add: craftsmen of centuries past would have been elated had they had the static calculations of their constructions at the tip of their fingers!

The material itself is also subject to special requirements. Calculations, generated by RhinoVault software and developed by the Block Research Group, showed that the stone should be no less than 5 cm thick lest the stone could crack under its own weight.

The construction’s maximum thickness of 13 cm can be found at its base.

Distribution of mass is optimized with the aid of steel feet, which transpose the weight over a large area. To avoid damage to the floor of the historic hall by drill-holes, the anchoring was achieved by means of tension-ties running between the feet of the base.

Finishing the 399 puzzle pieces in various different shapes and sizes required complex planning. E.g. specialists at Escobedo did not saw into curved pieces because this would have presupposed sawing each piece individually. Instead, they opted for a rough finish of the Armadillo’s surface making it appear somewhat scaly like the animal itself.

The underbelly was sawed in individual arched pieces by contrast as can be seen on the video. Stonemasons then chipped off the ridges by hand giving the underside a rough appearance.

This is another example of vice to virtue.

In addition, another particularity: the copestones were worked last of all only after the construction was practically complete. Thus fine-tuning could accommodate the actual requirements. After all, there is no mortice to buffer irregularities or divergent shapes. 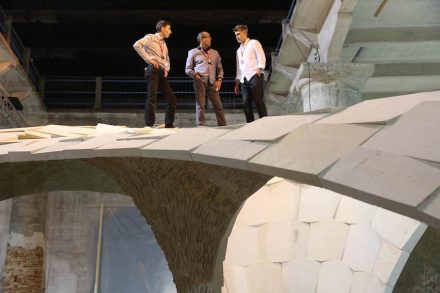 The construction is purportedly solid enough to support an entire American football team.