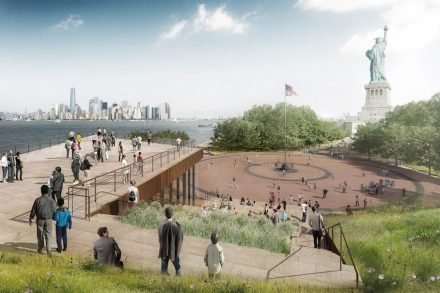 Stony Creek granite will be one of the materials of the new Statue of Liberty Museum. Plans were unveiled on October and the site is projected to open to the public in 2019.

The new museum – which is the key part of a beautification plan that also includes landscaping and lighting on Liberty island – will give the more than 4.3 million annual visitors to the Statue of Liberty the opportunity to learn about and honor the Statue’s history, influence, and legacy in the world.

The interior and exterior spaces will be built with the materials native to Liberty Island and materials used to build the Statue of Liberty and Fort Wood including Stony Creek granite, bronze, plaster, and a variety of native vegetation. Pursuant to the new FEMA Executive Order on floodplain management and resiliency, the museum will be set above 500-year flood levels and built to withstand hurricane force winds. 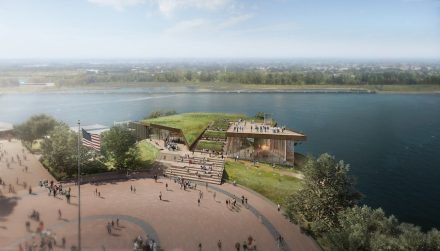 The exhibits inside the new Statue of Liberty Museum, created by ESI Design, will provoke insight, stir emotions, and inspire ideas about the Statue of Liberty and the ideals she represents. To begin, an immersive experience will take visitors on a virtual flythrough inside the monument with awe-inspiring perspectives and an overview of the story of Lady Liberty and how the world has changed around her.

Visitors can then delve into stories about the Statue’s construction, history, and global impact through historic artifacts, immersive media, and interactives. The culmination of the museum experience has visitors consider their own roles in liberty’s future through engaging activities.

Yet the architect of the news building, Nicholas Garrison, points out that the new museum shall not compete with the statue and will not be the first thing visitors see as they disembarked the ferry.

Outside, there will be monumental steps that lead from the circular plaza, rise above the core structure of the museum, and lead to its green roof, which will offer views of the Island and the city beyond.

The plinth of Statue of Liberty is build in granite. The Beattie Quarry was the source, as the webpage Connecticut History reports: „John Beattie, a Scottish immigrant and son of a stone cutter, bought 400 acres of land at Leetes Island in 1869. Included in this land was a part of the huge vein of granite that ran into the Stony Creek section of Branford. On August 5, 1884, a 6-ton block of Beattie’s granite became the cornerstone for the Statue of Liberty’s base.“

And more: „At one point, Beattie temporarily ceased his granite shipments for the project due to a lack of payment, but the famous publisher Joseph Pulitzer stepped in and helped raise the funds necessary to pay Beattie for the remainder of the statue’s granite base.“ 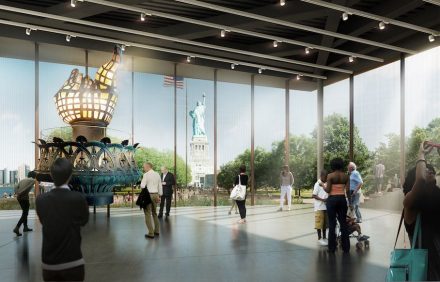 Much research had to be done to find the right stone which could stand the extremely salty conditions on Liberty Island and would be hard enough to bear the weight of the statue. Stony Creek Granite was chosen because it had been used before in the pillars of the Brooklyn Bridge, the webpage La Statue de la Liberté informs. (pebe)