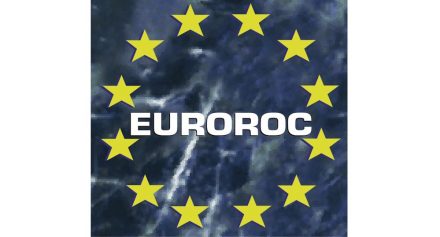 During its General Assembly at Marmomacc, Euroroc informed about its recent and upcoming activities. We give a short summary. The complete information may be downloaded (see link below). Euroroc is the European umbrella organization of national stone associations.

One of the main topics at the moment is updating the well-known codes like e.g. 25.15. NACE (Nomenclature statistique des Activités économiques dans la Communauté Européenne) is the acronym for these codes. They are not only important for correct statistics but also for customs tariffs, so for importers and exporters.

The updating brings a more precise petrographical definition of the categories.

An example: Until now, under 25.15 was included „Marble, travertine and other calcareous monumental or building stone … whether or not roughly trimmed or merely cut … into blocks or slabs …“

The update defines 25.15 as: „Rough stone blocks and rough slabs of sedimentary natural stones (e.g. sandstone, limestone, travertine), whether or not roughly trimmed or merely cut … into blocks or slabs …“.

In the future, marble will have its place among metamorphic; its new category wasn’t yet numbered:
* 25.xx: „Rough blocks and rough slabs of metamorphic natural stone (e.g. Marble, Gneis, Serpentine) whether or not…“

Also will be updated 68.02 about Worked Monumental or Building Stone.

Euroroc member federations should contribute their comments as soon as possible.

In recent months, an initiative was launched to provide the CE-mark data in digital form. The aim is that an architect, wanting to know all the features of a natural stone product, can easily find them in a special portal in the internet.

Many national initiatives are working on the topic. Its aim is to give local stones the label of the region it comes from – valid not only in this region but in the whole EU.

Important are such Geographical Indications (GI) against misuse of stone names e.g. by ceramic producers or by Asian providers.

In a separate and more detailed report in one of the coming Euroroc-News we will describe the state of the art.

At the end of November and in the beginning of December 2016 the Raw Materials Week will be held in Brussels. Its background is that many politicians see no necessity to keep e.g. stone quarrying alive in Europe.

In their view, such mining activities should be carried out in developing countries.

The Raw Materials Week is to create a public understanding for the necessity to keep mines and quarries alive. Bodies involved in this topic are the Non-Energy Extractive Industries Panel (NEEIP) or the European Network for Sustainable Quarrying and Mining (ENSQM), among others.

Euroroc, too small to start such an initiative by itself, is involved in their ongoing work.

The European Commission has launched a proposal for new regulations in respect of Crystalline Silica. Unfortunately, the proposed limit values are not realistic and the verification of these values is not feasible for stone masons.

Euroroc General Secretary Professor Gerd Merke: „There is no need for such new regulations. Better would be to stick to the old procedures: they were based on best-practices and were realized as negotiated agreements between all involved bodies.”

Also in discussion are emissions by diesel motors and by explosives.

More on the webpage of the European Network on Silica (NEPSI)

A discussion is going on in Brussels concerning the management of waste. It is crucial for the stone sector as, for the time being, it is unclear if stone will be categorized as inert or as non-inert material.

Inert means that stone left in a quarry or in the countryside does not undergo chemical processes neither in wet nor in dry surroundings. That is a matter of fact as stone is not a chemically dangerous material.

Yet it is to be feared that the categorization will go in the wrong direction due to a lack in information in the EU bureaucracy.

So the aim must be to support the discussion with the right information.

Jean-Claude Juncker, President of the Commission of the European Union since 2009, promotes the idea of modern economies being circular economies. That means that no waste is left neither from production nor from consumption but everything goes into a new circle of usage.

Euroroc’s and the position of the other members of the sector is not in compliance with Juncker’s idea. „Circular Economy is good in theory but in reality is not applicable everywhere,“ Euroroc’s General Secretary Professor Gerd Merke states.

He gives an example: The recycling of stone is always a down cycling – on every level pieces get smaller until they end up as gravel or sand. That is a matter of fact although in geological periods such „waste“ will again be turned into stone.