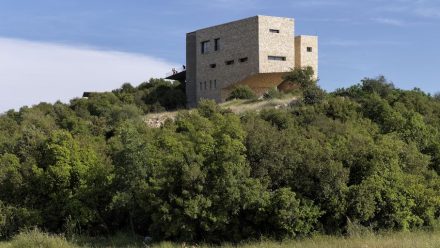 Ajloun in the Kingdom of Jordan is home to the Royal Academy for Nature and Conservation constructed on the rim of a defunct quarry. Khammash Architects, responsible for planning, convinced the client that the venue was more suitable that within a nature reserve. Local stone could be put to good use. The construction was nominated for an Aga Khan Award this year (1, 2).

„Opus Quatrum“ is the name of a modular pre-fab construction system comprising concrete blocks clad in natural stone on one side. Walls can be erected in a flash without a foundation (German).

Marble as material for household items is a trend, the Washington Post has found out.

Interaction between water and stone wells is demonstrated by Gasser Natural Stone Company with the aid of close-up photography.

Simple geometric shapes define „Fatti di Pietra“, a modular concept for seating in urban settings such as parks and gardens. As the name implies, the objects are made of natural stone. The draft is the work of Gumdesign of Italy. Realization by Testori Marmi (1, 2).

The Global Stone Congress 2018 will take place from Mai 6th to 9th in Ilhéus in Brazil’s Bahia Province.

A couple was injured in Chennai, India at their newly built apartment when a granite slab from an elevator shaft fell on them.

Video of the Month: how to apply realistic marble nail polish in 3 minutes.