Chess sets showing the splendor of art and of precious materials, among them natural stone 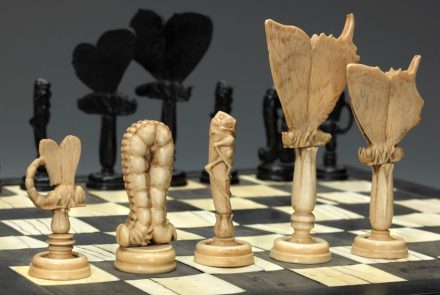 „Animal, Vegetable, Mineral“ is the title of a new exhibition at the World Chess Hall of Fame

The new exhibition at the World Chess Hall of Fame (WCHOF) has the title „Animal, Vegetable, Mineral: Natural Splendors From the Chess Collection of Dr. George & Vivian Dean“. Until March 12, 2017 are shown rare and beautiful chess sets providing a unique view of the past through their iconography.

The show commemorates the 55th year that Dr. George and Vivian Dean have collected chess sets together. Both lovers of history and art, the Deans traveled to over 100 countries to find over 1,000 of the finest chess sets from the 8th century CE to the present, and have assembled them into one of the world’s most distinguished private collections.

Unfortunately, we have no photos of natural stone as material for chess sets. But also those we can show are stunning.

The finest sets have always been made of either the richest materials native to their owners’ region or of exotic, costly materials from afar which reflected the owner’s wealth. 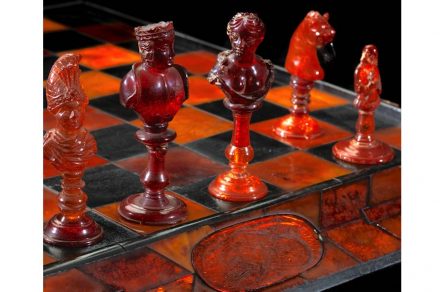 Minerals often used were so called „soft stones,” like the easy-to-carve soapstone. Durable hard stones such as fluorspar and the many varieties of marble have also been widely used, with the term „pietre dure” referring to the discipline of „painting in stone,” by creating complex images or decorations of individually cut, inlaid stone veneers.

Minerals, often rare and featuring stunning colors, unique crystalline structures, and dramatic patterns, can serve as both material from which a chess set is made as well as being subject of the chess set itself. 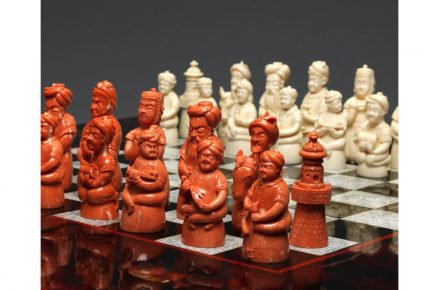 The mission of the World Chess Hall of Fame is to educate visitors, fans, players, and scholars by collecting, preserving, exhibiting, and interpreting the game of chess and its continuing cultural and artistic significance. It was founded in 1986 and his its site now in in Saint Louis (MO).