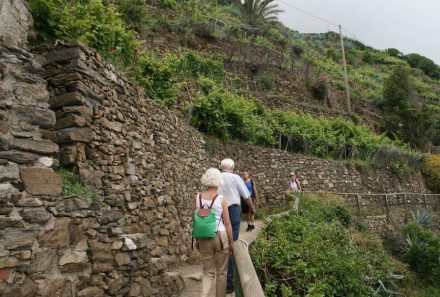 Drywalls are enjoying more and more esteem and appreciation. Walls of this type, constructed entirely without mortar, are part of the landscape, e.g. meandering seemingly forever as dividers between pastures or as terrace-boundaries in vineyards.

A French-based Organization, the FFPPS (Fédération des Professionels de la Pierre Sèche), is a professional trade organization dedicated to stone dry walling.
The Organization has recently set a goal to have the knowledge and craftsmanship needed in constructing a drywall recognized as an Intangible Cultural Heritage by UNESCO. This summer saw representatives of the craft, among others members of the Scientifique Internationale Pluridisciplinaire pour la Pierre Sèche (SPS) from eight European countries meet to set up the framework for realizing this ambitious plan.

Private individuals as well as official Organizations can support the application submitted to UNESCO. A simple letter addressed to the French Ministry of Culture in Paris mailed no later than February 2017 is sufficient. The letter can be written in English. For the complete address see the FFPPS Website.