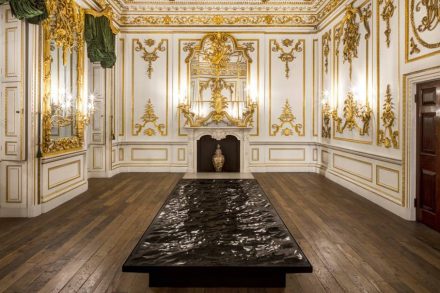 „Liquid Marble“ is the name Mathieu Lehanneur gave his artistic works, seemingly with surfaces rippled by the wind. The French designer last showed such a piece during the London Design Week at the Victoria and Albert Museum. The dimension of the works is 4 x 1.70m. and stands perched on a 30 cm high base (1, 2).

We had reported about Italian company FILA’s Staincheck-method. Björn Schouenborg, Manager of the natural stones research department at the Swedish CBI/SP has sent the following information: „It might be worthwhile checking the European standard that covers the same needs as is now claimed as the first time possible by Fila. The test method was developed in a joint-Nordic project about 10 years ago and subsequently introduced as a European standard: EN 16301:2013 Natural stone test methods – Determination of sensitivity to accidental staining. The reference of the Nordic method is NT BUILD 514 (download). A technical project report (Stain test for Natural Stones (NT TR 595)) can also be downloaded. The EN 16301 is available for purchase from each country’s standardization body.”

Coldspring (before: Coldspring Granite) with headquarters in Minnesota and quarries all over the US has acquired Texan company Stone Panels Inc the sole manufacturer of StoneLite panels.

„How Natural Stone Helped Bring a Wedding to Life during a Hurricane“ is a story on the portal Use Natural Stone run by Marble Institute of America and Building Stone Institute. 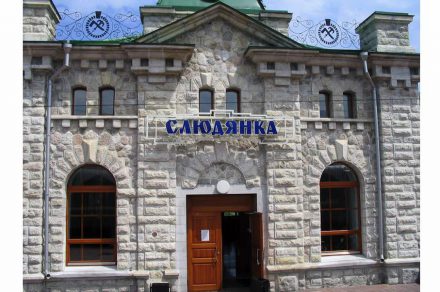 October 1916 saw the finishing of the bridge across Siberia’s Amur River and with it the opening of the Trans-Siberian Railway from Moscow to Vladivostok in the Russian Far East. Famous point of interest along the 9,200 km length: The Slyudyanka 1 Station, clad in marble commemorating the builders of the railway.

Silica Rule: „OSHA’s technological and economic feasibility finding is not based on substantial evidence in the rulemaking record“ for the agency’s rule on crystalline silica, the Construction Industry Safety Coalition (CISC) told the Court in a brief in November 2016.

Belgrade Waterfront is the name of a real estate project in the Serbian Capital’s historic port district at the center of which a 200m high sky-rise for luxury apartments will ensue.

The digital Stone Project of the Toscany-based Garfagnana Innovazione payed a visit to the East Coast of the USA to present results of its CNC machinery.

„Stones of Glass“ is the name of a collection of lamps by Italian-based Oluce Company. The objects can be placed on the floor.

Video of the Month: „Bright Cloister“ an architectural work of art in marble by Japanese architect Go Hasegawa for Pibamarmi, which won the Best Communicator Award at Marmomacc 2016.