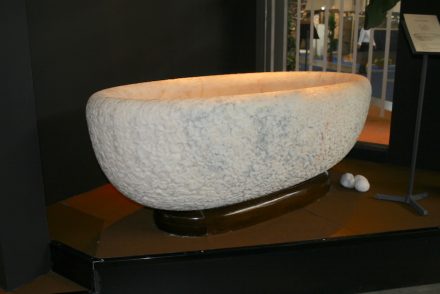 Spectacular bathtubs in solid stone can be admired on the website of Adorable Home. Bathtubs of this type are lovely to look at but not practical for bathing. Water cools down too quickly when it comes into contact with the massif stone. Room temperature is some 28°C but the water must be 38°C to be comfortably warm. The 1000 and more kg stone mass must first be heated by the water in the tub. Apparently no designer has yet considered this dilemma.

„Stone Paper“ is the name of an invention from Taiwan by means of which paper is not made of wood fiber but rather of calcium carbonate and resin. The innovative material was distinguished with a Red-Dot-Award 2016.

Michelangelo’s David has got a clean-up. The process takes place every two months because of the 1.2 million visitors per year in the Galleria dell’Academia in Florence. The statue with a height of 5.17 m is made of one block of Statuario marble from Carrara. Two other sculptors had already worked on the giant piece of stone until Michelangelo finished the colossal statue around 1504. The work was commissioned by a guild of craftsmen which had realized a successful uprising against the nobles of the city. That is probably the reason why David is shown strong, athletic and without any fear while awaiting the fight with Goliath.

„Rogue One“ is the name of the most recent Star-Wars-movie. We recall: Darth Vader, one of the antagonists, came a long way even outside Hollywood: He exists in form of a stone fountain at the National Cathedral in Washington.

MIA+BSI inform: The US-Cultural Landscape Foundation shares 2 articles on pavers (1, 2). The Natural Stone Promotional Campaign will be supported by the Benelux Federation of Natural Stone Wholesalers (FEBENAT) and the Belgian Fabricators & Stone Masons Federation. The content from the webpage Usenaturalstone.com will be translated into French und Dutch.

The famous amethyst gemstone mines from the Middle Kingdom in the Eastern Desert south-east of Aswan, Egypt are at risk from looting, modern gold mining and stone quarrying, Geoarchaeologist Per Storemyr reports in his blog.

The „Stone“ Trade Fair November 2016 in Poland’s city of Poznań, experienced a 20% increase in visitors to a total of 5400 most of whom originated from Poland and other European countries. But there were also visitors from the United Arab Emirates and Australia. A total 178 exhibitors showed their wares, 60% of which came from abroad from a total of 20 countries. In 2017 the trade fair will take place from November 22nd to 25th.

US-Home Brands Group, a supplier of building products and accessories for bathrooms and the residential remodeling market, has acquired Forza Stone, a developer of thin stone products.

A stonemason died after being crushed by two slabs of granite at a business on Brisbane’s bayside, Australia.

The Indian state of Tamil Nadu has accused companies for illegal granite quarrying, according to the New Indian Express.

An action plan to make Turkey-China economic relations stronger has been released by the Foreign Economic Relations Board (DEİK) and Turkey-China Business Council.

Video of the month: Lund University scientist in Sweden have reconstructed the antique villa of Caecillius Iucuncus of Pompeii in a video. Caecillius though not among the wealthiest in the city he was well-to-do (video, Swedish).