Be prepared: solar eclipse on Monday, August 21, 2017 racing from Oregon to South Carolina 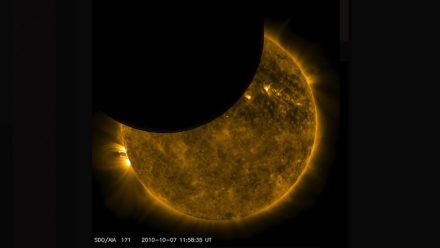 On Monday, August 21, 2017, in the morning, millions in the U.S. will have their eyes to the sky as they witness a total solar eclipse. The moon’s shadow will race across the United States, beginning in Oregon and ending in South Carolina. The path of the shadow, also known as the path of totality, is where the moon will completely cover the sun.

Thanks to NASA data, the most accurate maps of the path of totality for any eclipse to date are available.

The eclipse will start in the Northern Pacific and will have an umbra of about 100 km later touching Oregon, Idaho, Wyoming, Nebraska, Kansas, Missouri, Illinois, Kentucky, Tennessee, North Carolina, Georgia and finally South Carolina. The largest duration of total darkness will be reached in Southern Illinois with 2 minutes 40 seconds. The eclipse will end near the coast of Africa about 600 km southwest of the islands of Cape Verde.

Eclipse maps have long been used to plot the predicted path of the moon’s shadow as it crosses the face of Earth. Friedrich Wilhelm Bessel and William Chauvenet, two prominent 19th century astronomers and mathematicians, developed the math still used to make eclipse maps – long before computers and the precise astronomical data gathered during the Space Age.

Traditionally, eclipse calculations assume that all observers are at sea level and that the moon is a smooth sphere that is perfectly symmetrical around its center of mass. The calculations do not take into account different elevations on Earth and the moon’s cratered, uneven surface. 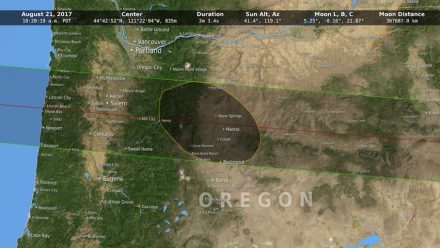 Now, using elevation maps, among other data, NASA visualizer Ernie Wright at Goddard Space Flight Center in Greenbelt, Maryland, created a continuously varying lunar limb profile as the moon’s shadow passes over the United States as it will during the upcoming eclipse. The mountains and valleys along the edge of the moon’s disk affect the timing and duration of totality by several seconds.

While the celestial event takes place, people all over the US will party, probably. A NASA webpage gives an overview of events and public engagement.

Such a hype is nothing new and was common before the information age: When the earth crossed comet Halley’s tail at its return on May 18th 1910, people raised their glasses for a comet-toast and danced the comet-rag. Ladies wore hats in form of the comet-tail and men decorated themselves with comet-ties or comet-socks.

Back to this year’s solar eclipse. The last time such a celestial event spanned the United States was in 1918, when the path of totality entered through the southwest corner of Washington state and passed over Denver, Colorado, Mississippi, Orlando, Florida before exiting the country at the Atlantic coast of Florida.