Winter Wonderland at the gang saw and in the quarry 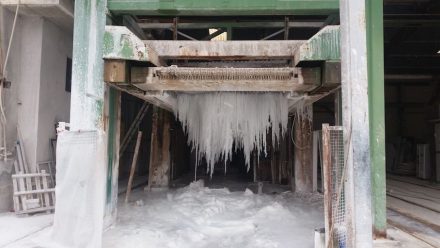 During the last days, Greece and the Balkans were suffering from an extreme winter: due to heavy snowfall, villages were cut off from the outside, schools had to be closed and even on the Aegean island Euboea people tried snowboarding on 2 m of snow.

In the harbors, smaller fishing boats were drowned due to the load which had fallen from the sky during days.

Refugees on the islands were suffering in their camps without heating or without proper shelter against the wetness.

Also in Thessoloniki in the Northern part of Greece temperatures had been below zero for a few days. The normal average winter temperature there is around +10 °C, extreme low in January is +1,4 °C according to Wikipedia. 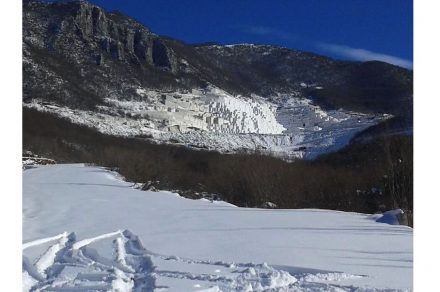 Located in the region are the quarries and factories of Stone Group International (SGI), one of the biggest producers of marble in Europe.

Magda Konstantinidou, press officer of the company, sent us some photos: stunning is the look of the gangsaw with icicles; still of grandezza is the company’s quarry for Pirgon white marble with snow in the forests around. That giant production scene has 26 floors which an annual production capacity of 140,000 tons of blocks. The quarry is located in the Drama region further north.

Icicles are a winter phenomenon of which some aspects are still not understood. Known is that they are formed e.g. on a roof when during frost the sun comes out and slowly melts the snow. Then, tiny drops run down the shingles to the rim of the gutter where they come to a short stop and freeze again. Other drops from above follow.

So the icicle starts growing downwards simultaneously in length and in width. 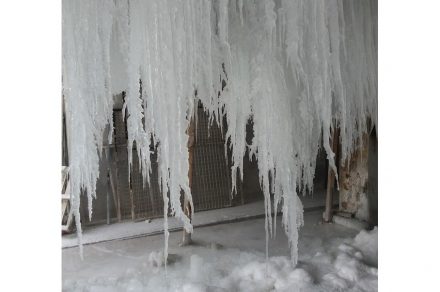 Recently understood was why the surface of an icicle bears ripples. To understand that phenomenon, scientists from Toronto University let icicles grow in endless experiments. In their „Icicle Atlas“ with more than 200,000 photos they suppose that the ripples are caused by little impurities in the water. 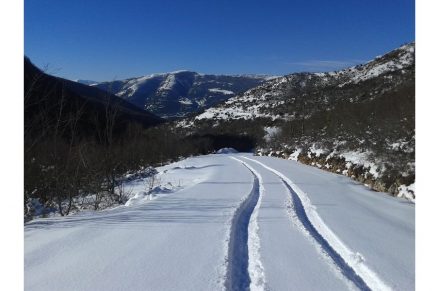