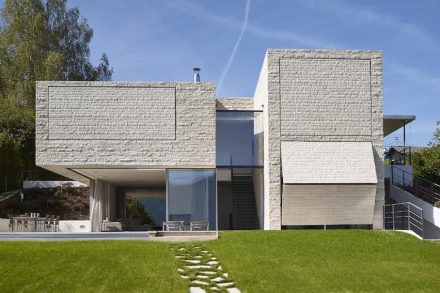 Natural stone is ideal for realizing architectural ideas as demonstrated on a private dwelling on the banks of Austria’s Attersee by Salzburg: here the movable, hydraulically driven shutters themselves are clad in limestone slabs… yet functional. 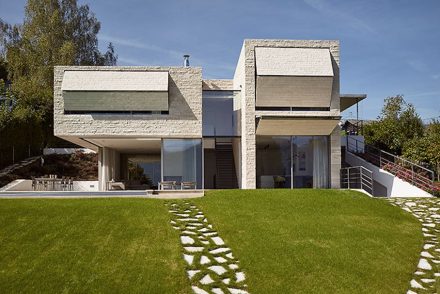 The idea as realized by architect Andreas Etzelstorfer of Studio Backraum, was to lend a monolithic air to the dwelling as unobtrusive as possible since the newly erected building stands before a magnificent natural backdrop.

On the other hand, the architecture was meant to appear somewhat ominous, especially to trespassers who might want to enter illegally. 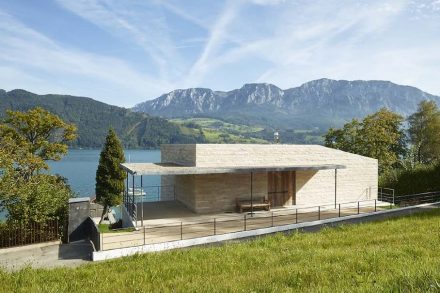 The street view shows a building whose interior is entirely blocked from passers view: old oak planks lend the impression of a fortress, particularly since the front door has no doorknob or handle. 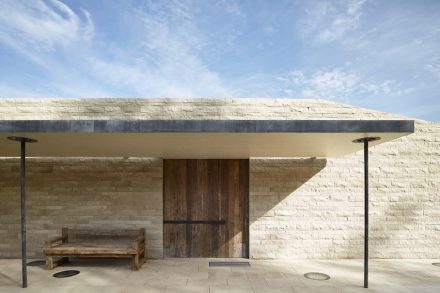 The door is another example of a distinguishing architectural element: the choice of material was meant to demonstrate the „sleek simplicity of stone and wood“. 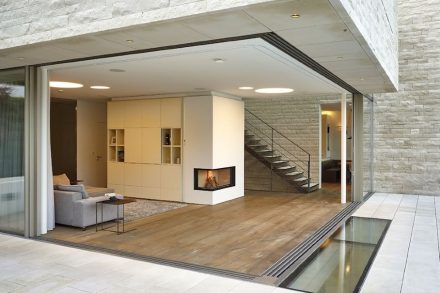 Thus the building is surrounded by a stone wall some 8-10 cm thick in local San Sebastian limestone with split face. The stone was set by hand piece by piece.

The horizontals create a continuous line joining up with the window sills. 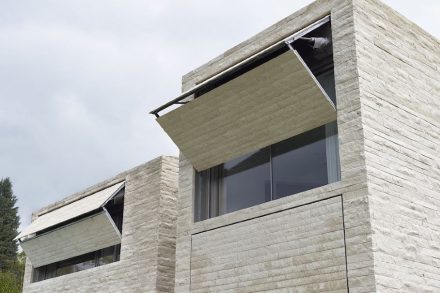 The shutters are, despite their function, still some 2 cm thick, which makes their weight about one tonne. When opening the shutter, a hydraulic piston presses the weight upward, a construction by Stahlundform company (Vienna); hydraulics by Torautomatik Team company of Switzerland and the static engineering work was calculated by Christian Petz (petz zt). 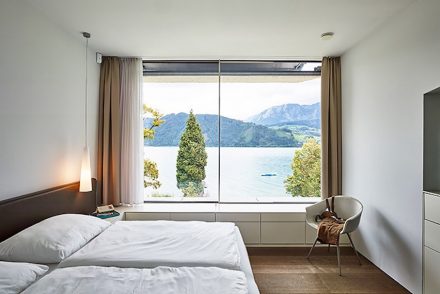 After the shutters open, which takes about one minute, the folded shutter-elements could double as a sun visor. As mentioned by architect Etzelstorfer, an inquiry to this effect already came from the sunny banks of the Mediterranean. 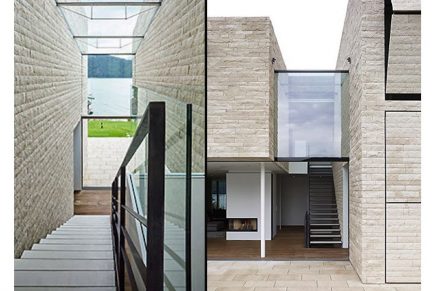 On the interior the „two-faced house“ (Etzelstorfer) has a few more surprises in stock: a kind of canyon in the middle of the house accommodates the stairwell and is also clad in stone (2 cm thick).

From there the tunnel to the outside view is even more impressive.
The living area, on the other hand, is dominated by wood: the floor is covered in oak planks 40 cm – 60 cm wide and up to 11 m long. „Just to manoeuver them unto the property, the builders had to temporarily make use of the neighbor’s property“, recalls the architect. 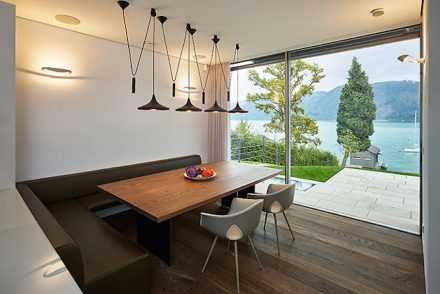