The city has been suffering from a wave of shooting, looting and assaults in the streets due to a police strike

Vitória Stone Fair scheduled for next week (February 14 – 17, 2017) might be cancelled due to continuing riots and violence in the streets of Espírito Santo’s capital Vitória. The organizers of the event, with responsibility in respect of their international visitors and exhibitors, have published a „Comunicado“ on their webpage expressing their concern about the situation and hoping that the authorities will solve the problem so that the fair can take place as planned.

Since last week Friday, Vitória has been seeing a wave of violence. The news portal „O Globo“ reports of at least 90 dead and a standstill of public live: schools and health centers are closed, soldiers patrolling in the streets.

Background is a strike of the Polícia Militar. That is not the military police but a section of the normal civil forces. They are demanding a raise of their salaries. The governor refused this due to his politics of austerity trying to reduce the extreme burden of debts of Espíritio Santo (ES) state.

The government has send in soldiers to regain control of the situation.

„The members of the Polícia Militar want an agreement with our politics“ sources cite a spokesman of the police’s trade union. On Friday (February 10, 2017) a meeting between both sides will take place. In its „Comunicado“ the fair organizers write that they „believe that the situation will be resolved by the competent authorities“.

Yet in other states of the nation, Polícia Militar has announced also to struggle for higher wages. In the State of Rio de Janeiro the financial situation at the Olympic Games in 2016 was so serious that employees in public service had been waiting for months for their salaries.

Espírito Santo is the biggest exporter of Brazilian natural stone (81% of total value and 75% in tons) as shown on the table below. 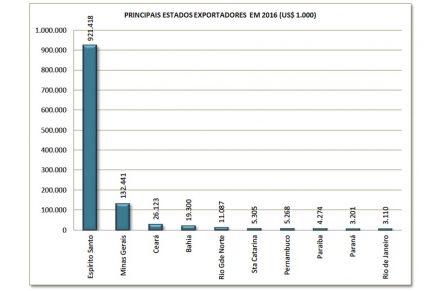 The financial crisis of the state already showed serious impact on the stone sector: as described in Abirochas Informe (1/2017), a magazine of the nation-wide association, there has been a shift of exportation from Vitória towards the harbors of Rio de Janeiro and of Santos (in the state of São Paulo). The distance from Cachoeiro de Itapemirim, one of the main stone areas in the South of Espírito Santo, to Rio de Janeiro is about 400 km and to Santos almost 900 km – all the way on the BR 101 highway, a nightmare of its own. (pebe)