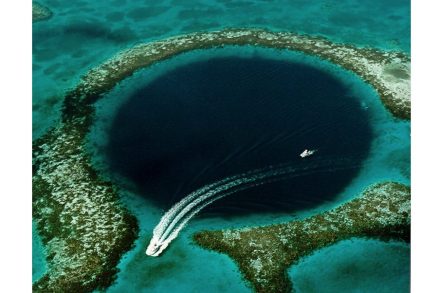 „Blue Hole“ is the name marine scientists have given to giant craters in the ocean near the water’s surface, e.g. in the limestone structure of a coral reef. „Dean’s Blue Hole“ in the Bahamas was hitherto thought to be the deepest funnel of its type what with its 202 m in depth. But Chinese experts have now corroborated proof of 300.89 m depth in the South China Sea „Dragon Hole“ with the help of marine robots according to Xianhua News.

A marble statue of Donald Trump was commissioned by the village Vagli di Sotto in Italian Tuscany, the BBC reports. The money comes from outside. The project seems to be an idea of the 1000 villagers to get into the media.

The Megalithic Portal gives readers an overview of stone arrangements from eons past.

A project in the Swiss Alps by architect Martino Pedrozzi has exposed the outline of ancient dwellings and stacked stones along them giving the appearance of a foundation below.

Product Design with natural stone is becoming more and more popular also in China. In 2016, UMGG company’s brand The 5th Gallery organized a competition for young designers. A webpage in Chinese language shows some of the works.

In Dubai, 71,000 new hotel rooms are planned, a report commissioned by the organizer of The Big 5 fair says.

„Mad About Marble: 20 Kitchens and Bathrooms“ is the title of a webpage by dwell magazine.

Holcim Award for Sustainable Construction: Applications are open until April 31, 2017. Professionals and students may enter projects characterized by a balanced interplay of responsible economic, ecological, and social agendas.

Marmomac fair (with only one „c”) has launched its 2017 communication campaign with two images. The first one has an „institutional“ character“, according to a press release: It focuses on the new graphics of the trademark, a „+“ sign between the words „Marmo“ and „Mac“. The second one seeks to point out cultural and experimentation as peculiarities of Marmomac. Here, the protagonist is „Panca Play“, a bench designed by Denis Santachiara for Costa Paolo company using Carrara marble as amplifier for a cell phone. The slogan remains „With Stone You Can“.

A hydroxyapatite clear coating to protect marble and other stone from environmental decay was developed by a research group at Princeton University.

Archaeologists have discovered a new cave in cliffs west of Qumran which once contained Dead Sea scrolls. Until now only 11 such caves had been known.

„The Architectural Imagination“ is the title of a free online course by Harvard university. It starts February, 28th.

Ideas of pure architectural imagination were awarded in the Fairy Tales Competition by the National Building Institute, Washington DC (1, 2).

The Wharf district is a $2 billion neighborhood situated on the southwest waterfront of Washington D.C. adjacent to the National Mall. It spans 24 acres of land and 50 acres of water. Developers are Hoffman-Madison Waterfront (HMW). Recently, 11 US-architects were selected to work in phase 2 of the project.

„Land Lines“ is the name of a fascinating computer game. With the aid of a computer mouse or a finger, users „Draw“ a line on screen and the program then searches for and finds an equivalent shape in a landscape. By clicking „Drag“ one can view the pictures one after the other in a type of slide-show (1, 2).