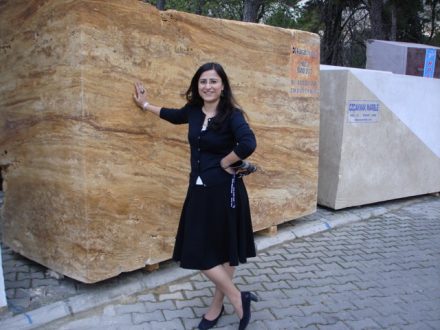 „Gently, responsibly, sensitively“ is the credo of Turkish-based Su Marble company. The words circumscribe Banu Bekişoğlu’s ideology. In 2016, Banu Bekişoğlu, was the first woman to be voted to the board of directors of the Turkish Stone Organization EIB. The Organization with the English name Aegean Minerals & Natural Stones Exporters Association represents companies in the Aegean and Western Turkey on the Mediterranean rim.

In the trade magazine „Marble Trend” the result of the vote was deemed a „revolution” in the local natural stone branch to the point of claiming that Banu Bekişoğlu had „written history”.

Her e-mail correspondence with us proves that she is no friend of big words but is quick to explain the background behind her credo, as published on her website: „Mother-Nature is a fascinating part of our life and she cares for our every need – but we are not grateful.“

This is why she upholds a culture of respect in her company headquarters, situated half way between Ankara and Izmir. Her staff of almost 100 employees live by this philosophy: respect for the environment and the ecosystem, but also mutual respect of colleagues. „Ensuring that people are happy is an important aspect in our company“, as she describes her entrepreneurial goals. 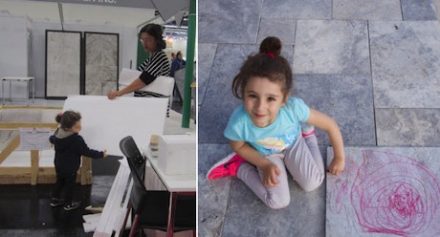 Mother of young daughter Deniz, but also a person for whom marble is something special: „The material itself fascinates me and my people and we aim to pass this enthusiasm on in our products and to the people with whom we interact.“

At this point one might expect to find pictures of heavy machinery moving tons of rock from one end of the quarry to the next.

But far from it: Su Marble opens its website with examples of use of marble in private homes. This, too, is a sign of appreciation of the material.
Banu Bekişoğlu originates from a natural stone family and was sent off to study – a task she explored intensively: she majored in political science and public administration and closed with an MBA degree. She requires one more credit for her degree in tourism management.

During her studies she took on jobs in the library or in the student residence. After completing her first degree she worked in a Middle East science research program.

But then she turned to the stone branch where her main function was to set up a work flow from the quarry to the value-added product.

This was no easy task for a woman, she admits. „At first I felt very much alone and trapped in man’s world: some advised me to take a long vacation and spend my father’s fortune, others refused to discuss company business with me or ignored me altogether.“

So she taught herself to work the machines after hours. „In the end, men began to stand up and take notice of me.“

„Today I know every step of stone production from the quarry to fabrication“ she says and adds: „I will probably never be a manager in the classical sense“.

Because for many managing men, money is the only emotion they know. (pebe) 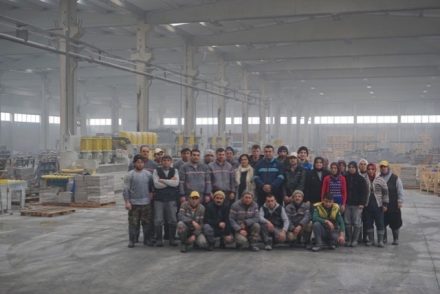