Coffeehouse tables topsy-turvy: natural stone for the pedestal, not the table-top 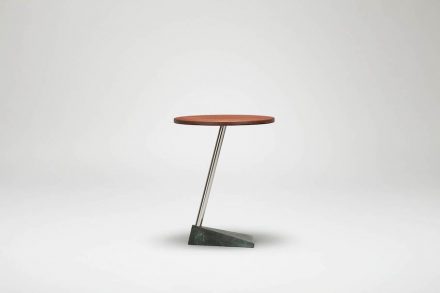 Born in Australia, designer Brodie Neill, entertains a studio in London’s East End and sets the world topsy-turvy. But perhaps it’s the other way around and he is merely lending a firm footing to a heady topic. His coffeehouse collection „Elements“ is radically material-compatible. Other designers would hardly dare go so far.

The foot of the tables, not the tabletop, is made of stone, which puts the objects’ center of gravity near floor-level for maximum stability. The tabletop is made of oak (warm and pleasant to touch). Both are connected by a steel shaft (stable yet flexible).

The design is a novelty insomuch as the positioning of the natural stone element is an understatement. The noble material is usually showed off, at least that has been the way of things for generations despite the fact that, with the possible exception of tropical climates, stone is way too cold for comfort when resting ones arms on it. 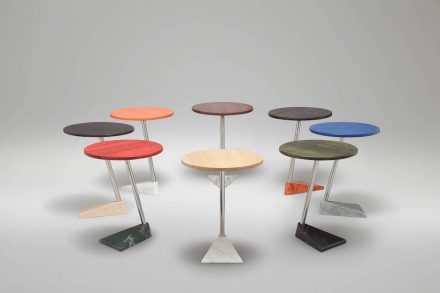 As far as the shape is concerned, Brodie Neill’s tables are distilled to an absolute minimum. The tabletop is circular, value proven, and rests on a steel shaft anchored in a rounded marble tetrahedron in contrast to the usual cube or classic pyramid.

As Brodie writes, he „honed his designer-maker skills at the University of Tasmania“ and defended his master’s thesis at the Rhode Island School of Design. His first international public appearance as a designer was at the Salone del Mobile in Milan in 2005. In the same year, he founded his London East End Studio.

One year later he represented Australia at the London Design Biennale and presented „Gyro“: a table made entirely of reclaimed plastic refuse from the oceans. He calls his design label Made in Ratio.