Hermana República: In the restaurant behind the gabions craft beer is served 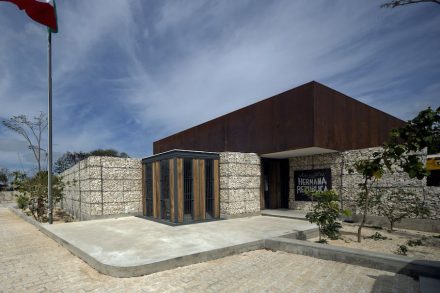 Craft beer has become quite popular world-wide. One might even say it is „en vogue“. This is beer brewed locally in limited amounts usually for on-site consumption.

Of course the brands make reference to the brewery’s location. Case in point is the Patito-Beer produced on Mexico’s Yucatán Peninsula. We would like to introduce the brewery’s showroom to our readers: it is the Hermana República Restaurant in the town of Mérida. The architecture of the building makes remarkable use of local stone. 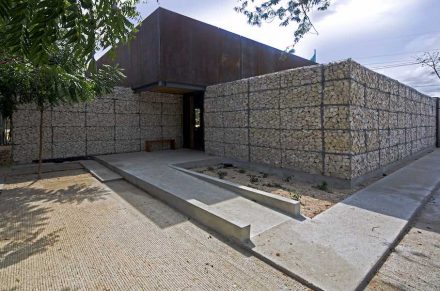 The restaurant’s walls are made of gabions. With the stone-filled wire-mesh containers, planers of Muñoz Arquitectos Asociados wanted to make reference to the old dry-walls, which line the paths meandering between plots of land on the Yucatán peninsula. These drywalls are commonly referred to as „Albarradas” – although, strictly speaking, the term refers to tile walls originally made of polished stone.

An interesting play of light enhances the walls’ optical impression particularly after sunset. Some of the walls bear vent holes where plastic pipes or shafts are incorporated in the gabion to allow air to circulate in the heat of the summer.
Glass panes behind the gabions are the de facto separators between interior and exterior. 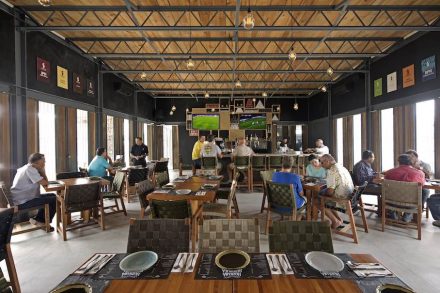 The interior is almost plain. Lightbulbs hang from the ceiling to provide light as needed. 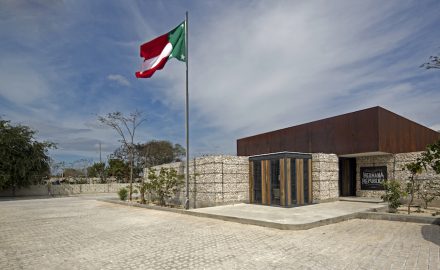 The concrete ceiling is concealed behind a Corten steel form whose shape makes reference to the often encountered „henequén” boxes used in the production of sisal rope and textile. The roof is supported by steel props.

The name of the restaurant, translates to „Sister-Republic“ and refers to the era of the peninsula’s declaration of independence from the central government in Mexico City in 1835. The word „Independente“ crops up a number of times on the brewery’s website in order to clearly keep distance from international breweries.
The gabions encircle the beer garden which can be reserved for private parties or weekend events.

The restaurant and its beer have gained wide acclaim and are cited in travel guides and the internet.