Slate akin to a river of molten lava, pressed up a wall and continuing to flow along the ceiling 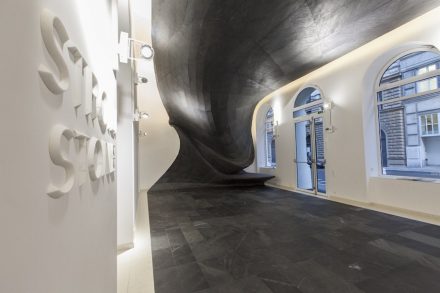 Has the Vienna Danube regulation become passé since it was completed 1870 and the river jumped its banks? One could certainly think so when looking through the ground-floor window into the basement of Eßlinggasse 15/1 in Vienna’s stock exchange district: The slate cladding on the floor seems to form a huge wave and press up the walls up toward the ceiling where it changes direction and flows back in the other direction.

But this is not about the Danube even if the River is but a stone throw away. This is about Stroili Stone’s showroom, where owner and CEO Flavio Stroili wanted to demonstrate artfully what can be done with natural stone and what young enterprises have in common with the material.

Creativity, know-how and courage for the unusual as a trademark, in a manner of speaking. 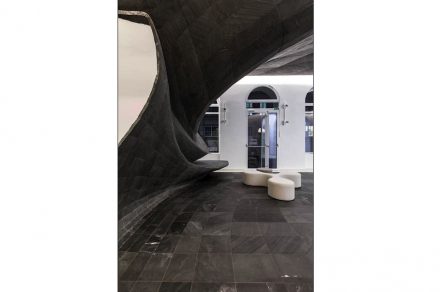 The idea with the wave is an analogy to magma, according to Ingrid Adamiker, assistant to the CEO. To achieve the desired impression, the floor was covered in 2 cm-thick natural slate slabs arranged in one direction. 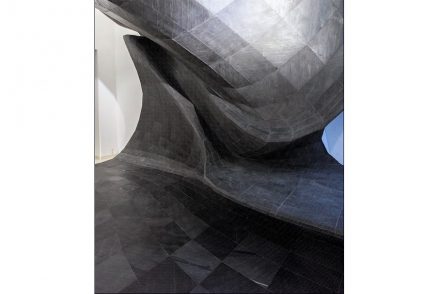 The transition to the perpendicular vertical surface is prepared by a type of up-arching followed by solidified crust on the wall.

The wall and ceiling are clad in 8 mm thick slate veneer which curl to a breaker.

The idea is the child of Stroili in cooperation with Architect Luca Paschini of Studio 3089 in Vienna. Seven companies from six nations conversing in four languages were involved in the project, which takes us full circle back to the Danube. 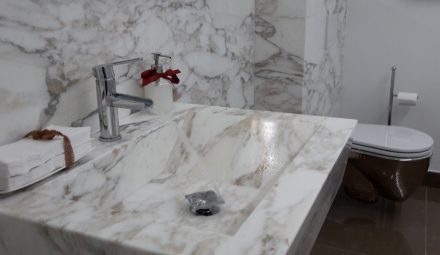 The showroom includes two bathrooms, one of which is clad in Calacatta Marble. On first sight, one would think the sink is solid stone. In fact it is composed of 2 cm thick slabs. 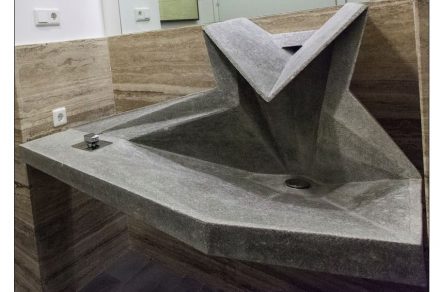 The second wash basin has a travertine wall behind it. The sink is made of shotcrete – unusual to see natural stone producers show an interest in other products.

But Stroili’s forte is its diversity aimed at finding the best and most original solution for its customers. (sumu)

Below, a swimming pool with stone mosaics, the work of Stroili Stone. 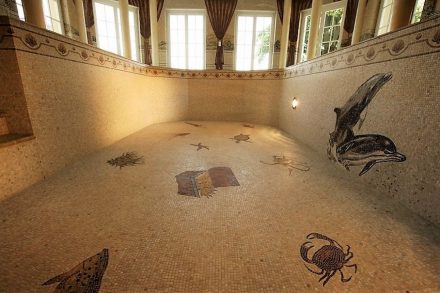 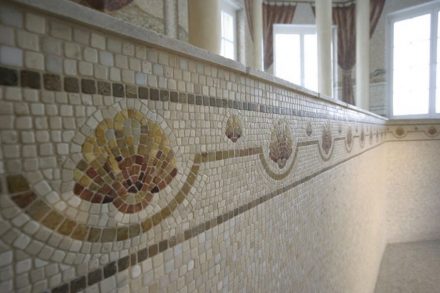