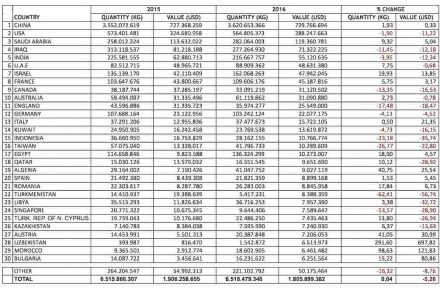 The Government has earmarked financial assistance in amount of a whopping 40 million Lira (almost 11 million US-$; 10,16 million €)

Sustained negative growth of Turkish natural stone imports: whereas 2016 saw exports of the same mass by tonnage to foreign buyers, the value dropped considerably by (-)5.26%. Turnover amounted to 1.806 billion US-$ leaving sales short of the magical 2 billion $ hurdle which had been taken once before as reported in the IMIB’s facts and figures.

Sales to the USA were down sharply. A dramatic development as many value-added products found buyers there in the past. Sales to China, on the other hand, were more or less constant. But China is in the market for raw blocks with low profit margins.

The Government of Turkey had already supported the branch substantially in the recent past. In 2017 some 40 million Lira (nearly 11 million US-$; 10.16 million €) in financial aid have been ear-marked. The figures are published in issue Nr 39 (November 2016) of the Trade Magazine Marble Trend.

Aid will come, e.g. in the form of 3 partnership summits with India and China as reported in the Trade Magazine. Also Trade Centers will be established in China, India and the United Arab Emirates. And, finally, the Trade Organization will once again be represented at the Design Week during this year’s Salone del Mobile.

Within the frame of the URGE Program (UluslararasRakabeti Geliștirme; Improving the International Rivalry) the natural stone branch has pledged to realize 10 projects, up from 6 previously envisaged. Turkey will be participating in Trade Fairs in China, the USA, Australia, Qatar, Brazil, Dubai, Saudi Arabia, Italy, Canada and France. A large number of foreign buyers are invited to the country in August.

Currently Turkey holds less than 10% of the world’s natural stone market, according to Marble Trend. But for Trade Organization President Ali Kahyaoğlu that is not enough. „We must achieve 25%“, the trade magazine quotes.