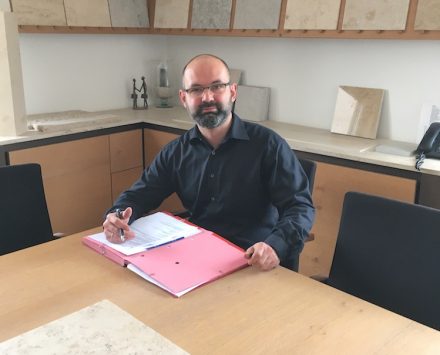 Semmler studied at the University of Munich and Arizona State Universities respectively and graduated as a Master of Economics and Business Administration.
Working for VM Kaldorf, Semmler will explore and develop his experience in the stone markets of North America and the Middle East.

As far as his role as his leadership is concerned, Semmler is counting on „the solid and successful structures“ already established in Kaldorf, which he aims to expand. His mission is more about „setting accents than about reinventing the proverbial wheel“. His credo: „never change a winning team“.

Among Semmler’s special projects at JMS were the Riverside South K1 Highrise in New York City and the Talan Towers in Astana, the latter of which in Kasachstan’s Capital was awarded a MIA+BSI-Pinnacle Award for 2016.

Semmler is married and has two children. He has strong bonds to his home turf and the limestone region of the Franconian Jura. Despite an extended absence during which he and his wife lived in the city, the couple were never city-dwellers, as he says in a phone interview. The family values rural living, „peace and quiet and wide open spaces on a large garden and a family home“. The personal environment is important.

Besides: what with Nuremberg and Munich on either side and Ingolstadt close at hand, city life is easy to reach, he adds.

Vereinigte Marmorwerke Kaldorf was founded in 1971. It has its own quarries and production sites and employs a staff of 120. An example for the use of Jura-limestone is the façades at the Copenhagen Opera, the New Museum of Liverpool and the „Russian Silicon Valley“ in Skolkovo in Moscow.