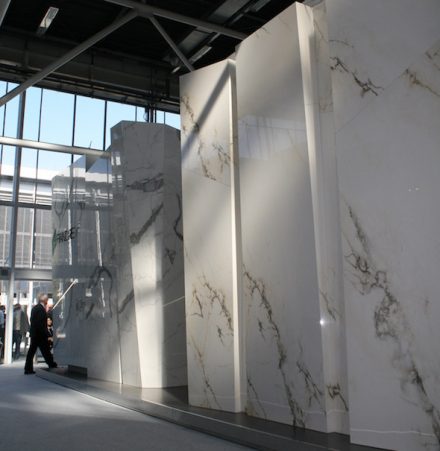 „Selling Stones With Emotions“ had been one of the topics of the World Stone Congress at the Stone Fair in Xiamen 2017. The idea had been born by Euroroc Secretary General Prof. Gerd Merke: he discovered that marble could hardly be distinguished from its ceramic or engineered stone likeness, and concluded that the stone branch must equip its vendors with a reason why clients should opt for stone – this could be achieved by playing on emotions. Manmade material does not possess the natural power to conjure strong emotions enjoyed by stone.

We now come back to the topic because Engineered Stone Neolith has won one of this year’s Red Dot Awards in the materials and surfaces category. The prize went to the so called „Nero Marquina“ which refers to the homonymous black marble, according to the webpage of the brand.

The jury’s statement hasn’t yet been published. But already in 2015, the Neolith version „Calacatta“ had won a Red Dot.

It had been presented on the webpage of the prestigious award: „This product offers a marble-like design with bold dramatic veining that closely resembles nature. It has the feel of the shimmering stone and is characterised by its resistance to scratch, heat and frost…“ Statement by the jury: „Neolith Calacatta combines the aesthetics of Carrara marble with the functional properties of sintered surface. It opens up a wide spectrum of design possibilities for architects and designers.“

By the way: The French stone magazine Pierre Actual (04/2017) has published a study which found ingredients harmful for health in quartz composites. We will soon report details.