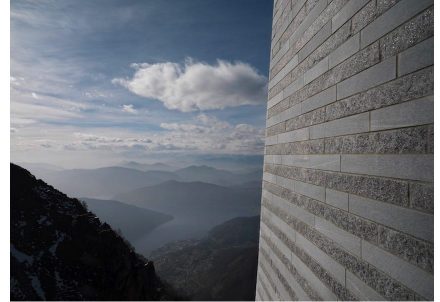 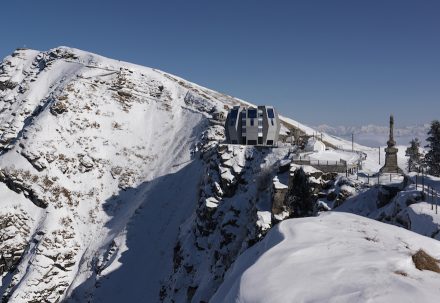 „Fiore di pietra“ (stone flower) is the name Mario Botta gave his latest creation. Standing in lofty 1,704 m height on the Monte Generoso on the border between Italy and Switzerland, the building unmistakably originates from the drawing-board of the internationally active architect: strip patterns in the façade, round and geometric forms in unique combinations and the material also makes reference to its close proximity: The façades are clad with local limestone.

But the blossom-shape of the building contrasts sharply with the alpine surroundings of rustic rough rock face walls. 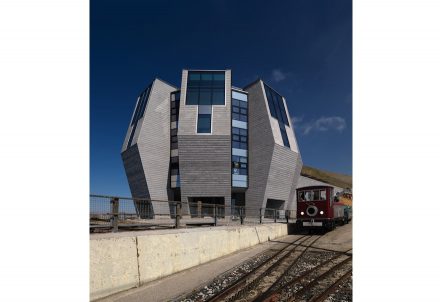 Botta’s „Stone Flower“ is situated immediately next to the alpine station of the cog-wheel railway which, it is hoped, will attract many new visitors. 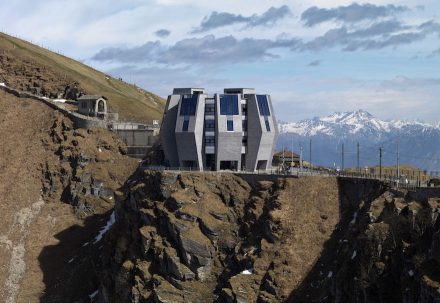 The narrow plateau, what with its breath-taking panorama view, belonged to the Hotel Bellavista until 2010 and was originally built around the turn of the 20th century. Safety issues forced its closing when rifts in the rock below had begun to compromise stability.

Mario Botta, who originates from the town of Mendrisio at the foot of the massif, where he currently entertains an office, presents a suitable alternative concept to the hotel. The idea convinced representatives of the Swiss Migros-Cooperative-Association. Migros is the largest food retail chain in the country and sponsors worthy cultural projects. As part of its „Culture-Percentage-Project“ Migros took over maintenance costs of the cog-railway in 1941, when it faced financial difficulties. But operation was never really profitable.

So when the boy from the valley, now almost a septuagenarian, told of his adventures in climbing Monte Generoso with endless view on sunny days and how the thin air of high altitude made him feel giddy. 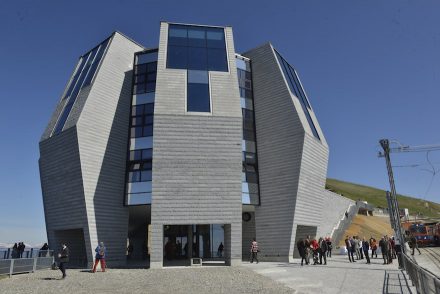 The basic shape of the „Stone Flower“ is almost spherical. Five stories lay concealed beneath the petals. The ground floor comprises the entrance and vestibule, above which a floor for technical equipment, one for conferences and two more for a self-service restaurant and high-class dining complete the blossom. 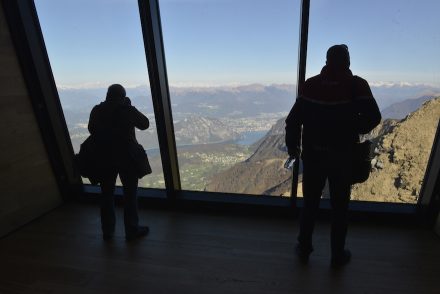 Whereas the stone „petals“ may appear cold and repelling, the five surfaces with large picture windows are invitingly conciliatory and offer magnificent panorama views of the surroundings.
Stone for the construction was provided by Elo Sangiorgio Company of Lodrino near Biasca. The installation was carried out by M.F.V. SA de Stabio Company.

Botta chose the stone because of its appearance which closely resembles that of the nearby mountains. Alternating bands of sleek and pointed finished surfaces afford a tiered look. The interior is finished in oak according to Botta’s directions.

Almost as spectacular as the venue at the edge of a 300 m cliff, was the project itself:
∗ to secure the foundation had to be stabilized and consolidated with the help of micro piles 600 m long in total;
∗ after demolition of the hotel complex was completed, the logistic challenge of transporting the components for the „Stone Flower“ to the top of the mountain began: 1500 m³ concrete, 170 t steel reinforced concrete, 400 m² windows and almost 1000 m² oakwood, totaling a mass of more than 20.000 t had to reach the top;
∗ to achieve this, a temporary cable car was set up which made a total of 3000 trips during construction spread over a period of 2 years.

The construction of the „Stone Flower” must withstand great sheer winds and material is exposed to extreme temperatures. 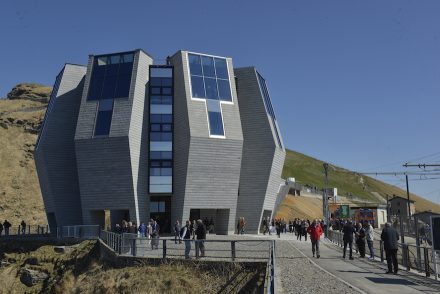 Sustainability is incorporated by means of a heat recovery system and use of the picture windows to capture sun rays. The central heating is powered with pellets from the Muggio Valley.

Electricity, water and communication were passed through 2 km-long pipes to the valley below.
Among the tourist attractions which the massif has to offer are some 50 km hiking tracks, caves with prehistoric artifacts, circular stone buildings (Le Nevère) which served as cooling houses, climbing, paragliding and mountain biking. 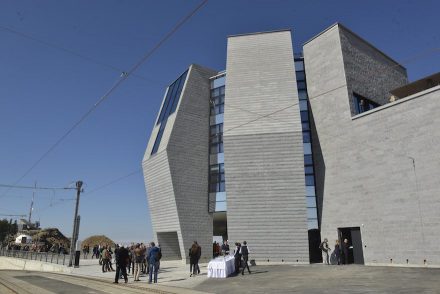 A one way trip on the cogwheel rail takes 40 minutes from the valley station Capolago on the shore of Lake Lugano.

Brenni Engineering AG was responsible for static calculation and safety and Marzio Giorgetti Architetti was the builder in chief.

Some 20 million Swiss Francs went into the construction of which one million was provided by the Canton Tessino. 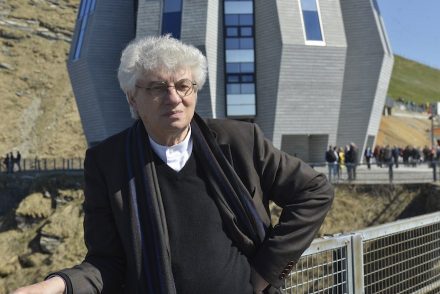