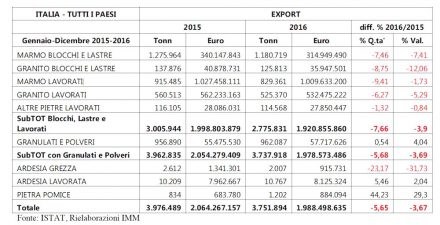 Italy’s natural stone branch faces negative growth in exports for 2016 relative to the previous year: producers sold 3.7 million t at nearly 2 billion € which represents a decrease by tonnage of (-)5.6% and by value of (-)3.6%. The facts and figures were presented by Centro Studi e Ricerche of Internazionale Marmo e Macchine (IMM) Cararra based on information of the Italian statistics-institute Istat.

The figures represent the first contraction after a 7-year period of sustained growth since 2009: during this period, exports experienced growth by a staggering 61%.

The current contraction represents negative growth across the board in all major types of stone and product groups.

Even the value-added marble segment, where Italy has used to make its best business, was affected albeit by a mere (-) 1.73% in value but (-)9.41% by tonnage. This means that suppliers made almost the same turn-over as in the previous year with considerably less material investment.

This means that despite negative growth by tonnage the value increased proving once more that „Made in Italy“ stone products continue to enjoy a sustained high level of prestige.

In a press release, exports of marble raw blocks to China and India are discussed. Also, the increase in purchase volume by China in Iran was pointed out. 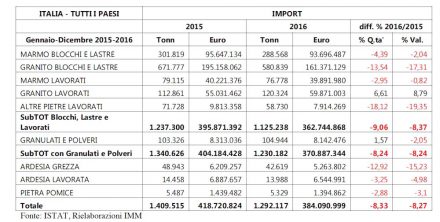