Brittany endorses its granite with a Geographical Indication (GI) seal

The seal is not only a marketing tool, it doubles as a means of establishing a network within the branch

Geographical Indication (GI) is currently an important topic in the French natural stone branch. Legislature was passed in 2014, and now Brittany has been granted authorization to bear the seal. Limestone from Burgundy is currently awaiting authorization and other types of stone are also poised to receive the seal. They are enumerated in a review article in the Trade Magazine Pierre Actual (Nr. 958, March 2017).

The Branch is hoping to gain a marketing advantage as well as the groundwork for improved networking among manufacturers.

Note that the seal is valid only in France. A similar seal valid in the entire EU has been put forward within the European Commission but has nothing in common with the French GI.

However both seals pursue the same objective, i.e. to protect their own from competition.

The story behind the initiative: in the recent past some manufacturers of emulated or engineered stone, i.e. concrete stone look-alikes, had dubbed their product „Granit Breton“ and propagated it at home and abroad.

There were also examples of foreign manufacturers who plagiarized trade mark names. 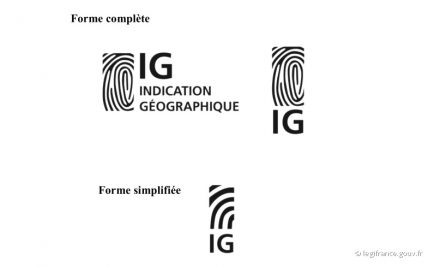 The legal stipulations and requirements for obtaining the GI-Seal are highly detailed and very stringent. Applicants must first submit an exact petrological description of the stone including a list of quarries where it is mined. Further questions follow, e.g.: concerning related or similar materials and their differentiation (in the case of Granit Breton the color palate would be one such factor), and end with the stone’s significance for the region and its population.

Markers are among others architectural issues, tourism and, in the case of Granit Breton, the local stone heritage foot path. Significance for the region and its population must provide an indication of how local stonemasons work the stone and what the distinguishing factors are.

Compilation of facts include the so-called petrological DNA-analysis, a method of analysis developed in France which allows a type of genetic fingerprinting. The Bretons require this test of their own accord, as it provides an effective deterrent against plagiarism from abroad.

Note that only entire regions are eligible to apply – a company or producer cannot. Networking is a desired side-effect of participation.

The idea was coined by the AFIGIA Organization (Association Française des Indications Géographiques Industrielles et Artisanales), founded some two years ago which views itself as a network for exchange among interested and experienced parties. „We take pride in finding the most cost-efficient solution for our members“, as per Audrey Aubard, secretary general of the organization.

The application fee payable to the National Institute of Industrial Property (INPI) is, albeit, a mere 350,00 €, however the effort and subsequent costs are substantial – so much so, that small companies would not be able to finance the procedure. But it is the express desire to involve just such firms as well as the big players – at least according to the concept.

After certification through the INPI – which takes about 2 months – companies are entitled to use the GI-seal. They are, however, not obligated to do so. The INPI Webpage gives an overview of submissions and approved applications.

The seal protects local products but it also provides other advantages.

One such perc is the marketing angle: „The label provides Granit Breton with a unique distinguishing factor and certifies authenticity“, according to Audrey Aubard. In other words, the stone will carry a degree of specialization for all times.

Consumers can be sure of high quality and veracity of declared content. Thus, the certificate of provenance will be very important for public tender projects.

Experience has shown that entire regions can profit.

The law requires that all steps and components involved be of local origin.