University of Utah geologist: it was the saltwater itself that made the concrete in Roman marine buildings so enduring 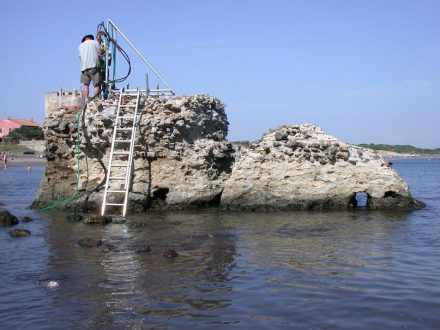 Around A.D. 79, Roman author Pliny the Elder wrote in his Naturalis Historia that concrete structures in harbors, exposed to the constant assault of the saltwater waves, become „a single stone mass, impregnable to the waves and every day stronger.” He wasn’t exaggerating. Now scientists from the University of Utah have found an explanation why Roman piers and breakwaters endure since 2000 years while our modern concrete in the sea crumbles after a few decades: it is the seawater itself which allows interlocking minerals to grow within the material and to strengthen the structure of the matrix.

The study by geologist Marie Jackson was published in the American Mineralogist magazine.

Romans made concrete by mixing volcanic ash with lime and seawater to make a mortar and then incorporating into that mortar chunks of volcanic rock, the „aggregate” in the concrete. The combination of ash, water, and quicklime produces what is called a pozzolanic reaction, named after the city of Pozzuoli in the Bay of Naples.

The Romans may have gotten the idea for this mixture from naturally cemented volcanic ash deposits called tuff that are common in the area, as Pliny described. 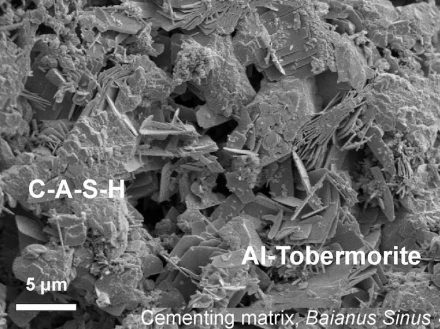 As the news study reveals, the special strength of this concrete results from the mineral aluminous tobermorite (Al-tobermorite) and a related zeolite mineral, phillipsite which grow in the cement after it has hardened.

The scientists found that the seawater percolating through the concrete in breakwaters and in piers dissolved components of the volcanic ash creating highly alkaline leached fluids, out of which Al-tobermorite and phillipsite were formed.

The Al-tobermorite has silica-rich crystals with platy shapes that get caught in the cementing matrix. These interlocking plates increase the concrete’s resistance to brittle fracture.

Jackson says that for modern materials this corrosion-like process would be a bad thing. Because in modern buildings it is the seawater that initiates an alkali-silica reaction that is one of the main causes of the destruction of Portland cement. „We’re looking at a system that thrives in open chemical exchange with seawater.”

She is now working with geological engineer Tom Adams to develop a replacement recipe for a „Roman“ concrete feasible with materials from the Western US. Such material could not only be more resiliant than modern concrete but would also have a much better carbon footprint.

The seawater in her experiments comes from the Berkeley, California, Marina, collected by Jackson herself.

Yet one has to acknowledge the limits of the ancient Roman concrete: it could not take the load of really big buildings like skyscrapers and – it takes a long time for the seawater to filter through the material and to develop its full resilience. 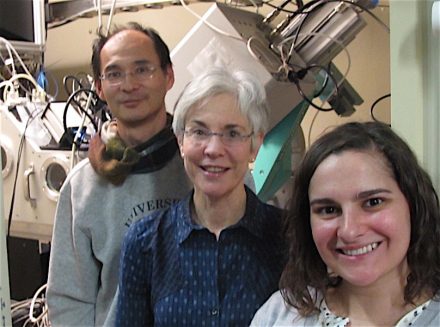