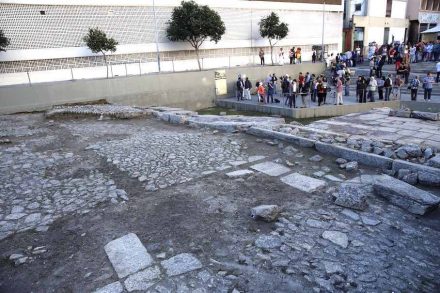 Those stones could tell stories of incredible suffering and inhumanity: The Unesco Committee has awarded the Valongo Wharf (Cais do Valongo) in Rio de Janeiro a World Heritage; at this pier, from 1811 until the middle of the 19th century, the ships landed coming from Africa bringing slaves to South America.

The human freight, often emaciated and sick after the terrible voyage, was quarantined, then sorted and sold.

The site is nowadays located within Rio de Janeiro center encompassing the Jornal do Comércio Square. It had been discovered by accident in 2011 during the refurbishment of the port area for the 2016 Olympics.

The remains of the Valongo Wharf are composed of several archaeological layers, the lowest of which consists of floor pavings in pé de moleque style. That is where the slaves put their feet on South American soil.

It also encompasses the remains of the Empress’s Wharf, the pier were in 1843 Spanish Princess Teresa Cristina Maria de Bourbon had landed coming to marry Emperor Pedro II.

Valongo Wharf now is a twin with Ile de Goree, a small island in Dakar harbour which had been awarded World Heritage in 1978 as an emblem for departure point of the slave trade. The ships used the so-called „middle passage“ with much more traffic than to the United States.

Unesco gives on its webpage an estimated number 900.000 slaves brought to Valongo Wharf, other sources speak of 4 million shipped to Brazil.

Also added to the World Heritage list was the archaeological site of Aphrodisias in Turkey and the marble quarries northeast of the city, among others.