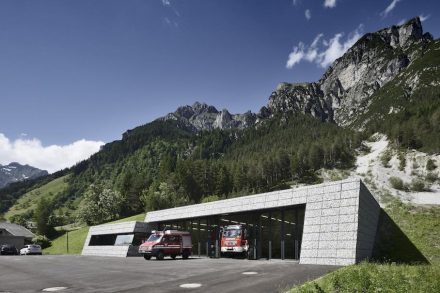 From a flat-lander’s perspective, people in mountainous areas often live in unusually dangerous conditions, emanating from the outcrops. The Pflersch fire station near the Alpine Brenner Pass is a case in point: the building is located at the foot of a mountainside where many a mud and rockslide has come down in the past and where they are expected to come down in the future. With their design, the architects unmistakably express the fact that the site necessitates man to duck in the face of the mountain but will not yield. 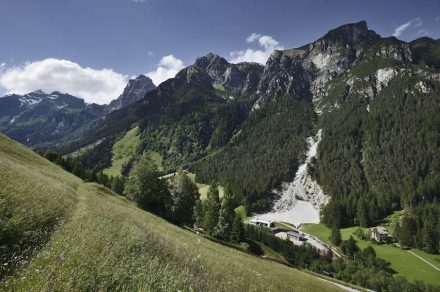 The most remarkable element from the exterior of the building is the gabion-façade filled with Wetterstein gravel from the construction pit. The gabions are arranged at unusual slants. The stone layers protect the insulation layer applied to the concrete walls.

The gabions give beholders the impression that the fire station was born out of the mountain. Its slanted front is reminiscent of a glacier terminus.
But the grid pattern of the gabion-cages bring us back to the reality of human construction. 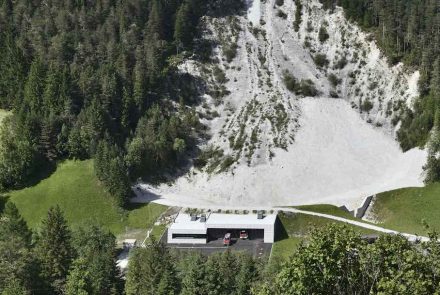 The architects turned vice to virtue: the building ordinance for hazard-zone planning stipulates that a dam must be built at the foot of the mountain so categorized. Land and mud-slides accumulate in the catch-basin behind the dam.
So, the fire station was placed right in the middle of the dam. Thus is becomes a blockade against the hazard line extending the slope to incorporate the station. 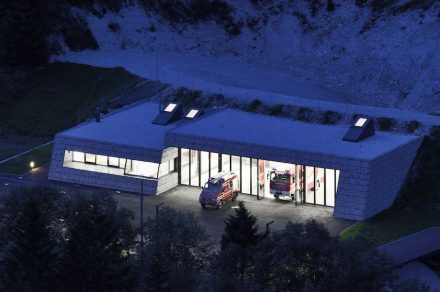 The station is but a single-story building and extends beyond the dam only minimally and comprises a lower section where the command section with a view of the valley below and message headquarters. Dorms and personnel headquarters are integrated behind it. 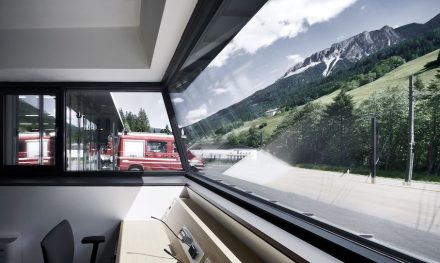 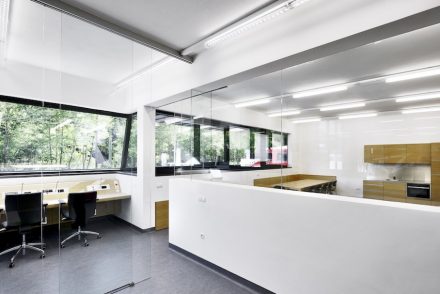 The higher section of the building next to the com and dorm sections, contains the trucks and equipment. From a street view, the sections are clearly distinguishable.

But where is the fire station’s tower traditionally used to dry the water hoses? For this purpose, an innovative slanted drying system was integrated as an economical yet functional solution. 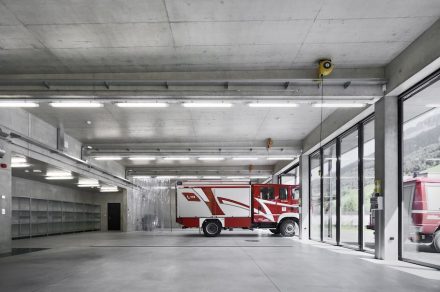 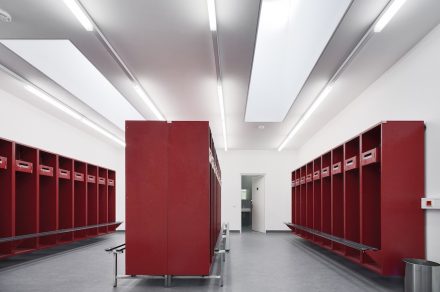 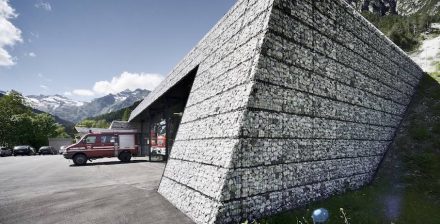 The station is manned by a team of volunteer firemen responsible not only for fire-fighting but also on call for the Brenner region north of Bolzano. In the past calls came in e.g.: when a freight train lost toxic fluids in the station or when the driver of a passenger bus miscalculated a turn and nearly slid down the mountain. The fire-fighters document such occurrences in Facebook.