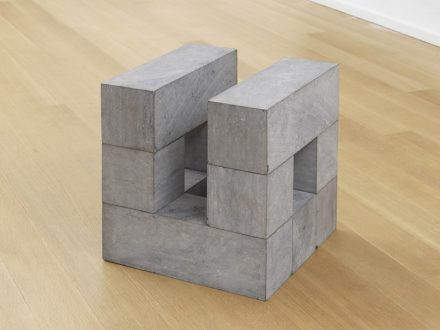 The topic of the „Metropolis“ show is how artists use the city as a source for materials, subjects, and ideas

„Metropolis“ is he title of an exhibit at the Simon Lee Gallery, New York until August 11, 2017. It showcases how artists use the city as a source for materials, subjects, and ideas. The works present how artists can interpret the metropolis in multifarious forms, and illustrate the universality of the city.

One o fht pieces on show is also „Belgicube I“ by Carl Andre (1988): It consists of 10 limestone ashlars and explains well the art of this American sculptor: Andre never carved a form out of a raw material but only assembled existing forms. His way of creation followed „the principle of masonry construction”, as he himself said, like stacking up bricks to build a wall.

He called himself a „matterist“.

For many critics, this was not art. Yet Andre was a protagonist in minimalism in the 60s and 70s when many artists tried to bring creativity to its innermost.

Andre never used glue or fixatives to keep the components in place. He insisted that all new works were installed by himself so that he could care about the scale of the surroundings.

Yet after dismantling and transportation, his pieces may be reconstructed without him.

Other artworks in the „Metropolis“ exhibit are: „Small Red Music Listening Station“ by Angela Bulloch; „Soundtrack For Development“ by Noah Barker, „Acid, Lower East Side“, „Untitled“ and „Vinnie“ by Larry Clark, „Children’s Day Care“ by Dan Graham, „Untitled“ by Zoe Leonard, „Let The Flourish Break My Fall“ by Eric N. Mack, „no arms, no heart, All lungs“ by Eric N. Mack, „Tony (Her)“ by Rose Marcus, „W1W 8QN“ by João Penalva, „Ceiling“ by Luc Tuymans and „Untitled“ by Kelley Walker.

Photos: Courtesy of the artist and Simon Lee Gallery 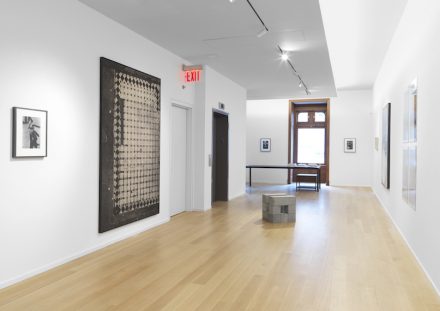