Chilling drinks with a marble plate from the outside, not with stone cubes within the liquid 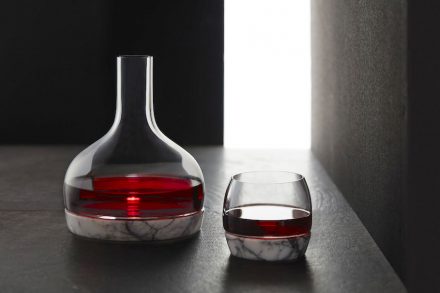 Chilling drinks by little stone cubes is a product idea which many stone producers use for promotion. A new version of such stony ice-cubes which do not melt was brought to the market by Turkish design company Nude: here, the cooling device is not put into the drink but is a decorative marble base underneath it.

The „Chill Collection“ won one of this year’s German IF Awards.

As Nude’ focus is on glasses and decanters, there was given special attention to the shape: „The glass has a special curve that creates a natural movement of the content increasing flavor and aroma. This glass – marble pairing complete search other with soft, puzzle like curves. “ 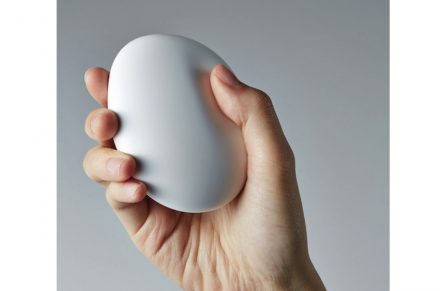 Another object worth mentioning is „Touch and Feel“ by South Korean Samsung SDI company which had been awarded in 2015. The user shall hold in his hand pebble-like items with various types of finishing. The webpage gives information about the idea: it is „a polymer that presents the user with a whole new sensory experience by creating three types of textures: crunchy, supple, and crisp.“

On several occasions, we had already reported about natural stones’ peculiarity of a tactile surface.